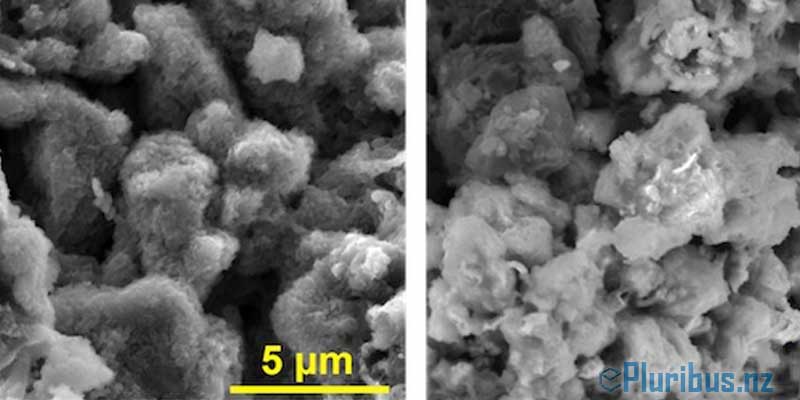 Scanning electron microscope images show an anode of asphalt, graphene nanoribbons and lithium at left and the same material without lithium at right. The material was developed at Rice University and shows promise for high-capacity lithium batteries that charge 20 times faster than commercial lithium-ion batteries.

A touch of asphalt may be the secret to high-capacity lithium metal batteries that charge 10 to 20 times faster than commercial lithium-ion batteries, according to Rice University scientists.

The Rice lab of chemist James Tour developed anodes comprising porous carbon made from asphalt that showed exceptional stability after more than 500 charge-discharge cycles. A high-current density of 20 milliamps per square centimeter demonstrated the material’s promise for use in rapid charge and discharge devices that require high-power density. The finding is reported in the American Chemical Society journal ACS Nano.

“The capacity of these batteries is enormous, but what is equally remarkable is that we can bring them from zero charge to full charge in five minutes, rather than the typical two hours or more needed with other batteries,” Tour said.

The Tour lab previously used a derivative of asphalt – specifically, untreated gilsonite, the same type used for the battery – to capture greenhouse gases from natural gas. This time, the researchers mixed asphalt with conductive graphene nanoribbons and coated the composite with lithium metal through electrochemical deposition.

The lab combined the anode with a sulfurized-carbon cathode to make full batteries for testing. The batteries showed a high-power density of 1,322 watts per kilogram and high-energy density of 943 watt-hours per kilogram.

Testing revealed another significant benefit: The carbon mitigated the formation of lithium dendrites. These mossy deposits invade a battery’s electrolyte. If they extend far enough, they short-circuit the anode and cathode and can cause the battery to fail, catch fire or explode. But the asphalt-derived carbon prevents any dendrite formation.

An earlier project by the lab found that an anode of graphene and carbon nanotubes also prevented the formation of dendrites. Tour said the new composite is simpler.

“While the capacity between the former and this new battery is similar, approaching the theoretical limit of lithium metal, the new asphalt-derived carbon can take up more lithium metal per unit area, and it is much simpler and cheaper to make,” he said. “There is no chemical vapor deposition step, no e-beam deposition step and no need to grow nanotubes from graphene, so manufacturing is greatly simplified.”

Li metal has been considered an outstanding candidate for anode materials in Li-ion batteries due to its exceedingly high specific capacity and extremely low electrochemical potential, but addressing the problem of Li dendrite formation has remained a challenge for its practical rechargeable applications. In this work, we used a porous carbon material made from asphalt [Asp], specifically untreated gilsonite, as an inexpensive host material for Li plating.

The ultrahigh surface area of over 3000 m2/g of the porous carbon ensures that Li was deposited on the surface of the Asp particles, as determined by scanning electron microscopy, to form Asp-Li. Graphene nanoribbons [GNRs] were added to enhance the conductivity of the host material at high current densities, to produce Asp-GNR-Li. Asp-GNR-Li has demonstrated remarkable rate performance from 5 A/gLi [1.3C] to 40 A/gLi [10.4C] with Coulombic efficiencies >96%.

Stable cycling was achieved for more than 500 cycles at 5 A/gLi, and the areal capacity reached up to 9.4 mAh/cm2 at a highest discharging/charging rate of 20 mA/cm2 that was 10× faster than that of typical LIBs, suggesting use in ultrafast charging systems. Full batteries were also built combining the Asp-GNR-Li anodes with a sulfurized carbon cathode that possessed both high power density [1322 W/kg] and high energy density [943 Wh/kg].