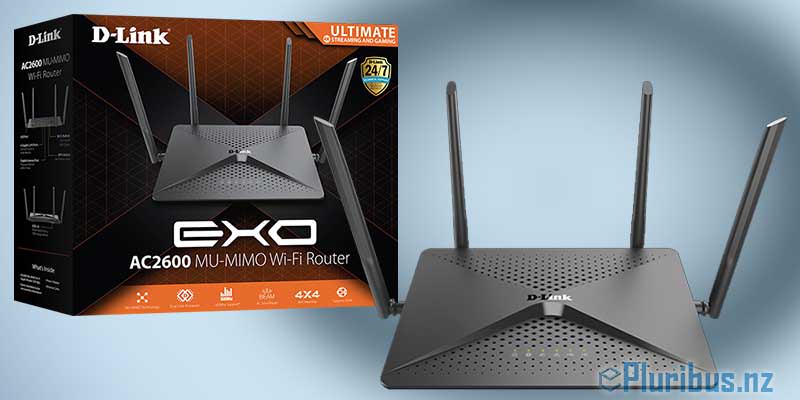 Review:
So… D-Link R&D have popped out another Alien Spaceship / Spider from Mars hybrid, joining the Viper and Taipan in design style… and let me tell you anything that looks like this is a device you want if you want speed matched with astounding signal clarity and strength. Boasting only two channels – 1x 2.4GHz and 1x 5GHz – this beastie runs dual bands on each, effectively giving you four full-speed device channels. That means your smartphone, laptop, gaming console and security camera can all cha-cha away at full transmission speeds without getting in each other’s way. Naturally, that’s great in theory so I had to test that in practice. I installed this unit, mounted it high on a wall and adjusted the aerials to maximise the signal distribution. After temporarily disabling the current WiFi on the modem, I connected this unit via a Cat-6 cable to a spare ethernet port on the modem and waited while the DHCP slotted it into my local network. It took only a few minutes to browse through the menu – I was somewhat familiar with the layout due to testing a previous model that used the same UI – and set up the two WiFi channels for minimum signal overlap with surrounding devices.

The first thing I want to comment on is the very simplistic ‘home page’ with a reductionist layout diagram showing your data pipeline: Internet to DIR882, which then branches off to Connected Clients at the top and USB Device underneath. If there are any issues, the connections between bubbles is marred by a large red “X” and a red button that gives you the option to “Click to Repair”. It should be noted here that due to the type of connection I have, I couldn’t test the modem functionality due to a compatibility issue between the method of port authentication used by my ISP and this device, which is why this is being tested purely as a WiFi Access Point and Local Network Router, and why I had a large red X between “Internet” and “DIR882”. Now, down to testing…

Due to the clever technology behind AC SmartBeam – which is very closely aligned with the study of waves and shoreline erosion, surprisingly – I was able to get blazing fast speeds and minimal ping-times no matter where in the building I was standing. Using cable-connection speeds as a benchmark – Ping of 8ms, Download of 113.7Mbps and Upload of 23.8Mbps – the WiFi came in very nicely at an average Ping time of 8ms, Download ranging between 64.4 – 127.5Mbps and Upload fairly steady at 24.4Mbps I found it to be remarkable. This was around 40% faster than the WiFi on my modem, and about 22% improvement over the previous D-Link WiFi AP I had installed. This was using the full capacity of the Dual Band system to maximise the throughput.

Slapping a 2TB portable USB 3 hard drive into the port on the side of the unit made it available as a network-attached media server, which was great for when friends brought over movies to watch. Some of my visitors are into 3d animation and it’s great to be able to watch their latest efforts on the big screen rather than have 3-4 people trying to crowd around my PC to watch.

The QoS (Quality of Service) Engine is simplicity itself to use – you are presented with an array of icons representing the devices actively connected, and a trio of “priority” grids into which you drag the device icons in order to prioritise their traffic flow. The single yellow grid is where you drag the single most important device, the one you want to take the lion’s share of the bandwidth when active. The teal “High” grid has two slots for those devices that also warrant priority. The third, grey, grid is for the ‘Medium’ priority devices and it has 8 slots. Anything else will be treated as low priority and get whatever bandwidth is left over.

Fitted with “L2TP over IPSec” VPN as standard, you can set your device to act as a secure server that you can access from anywhere – naturally, you need to sign up to a VPN service first, and enter your account details into the router’s configuration screen under User > Device. With this feature, you can easily make your own personal “cloud storage” for uploading all those great holiday photos or important documents in case anything happens to your portable devices before you get home.

There’s also a very fully-featured Firewall feature that continuously watches for malicious traffic passing through and locks it down in case of a DDoS attack or Port Bashing. Combining that with the Website Filter – aka Parental Controls on Steroids – you can create a Whitelist OR Blacklist of up to 24 sites/rules. I didn’t look into Static Routes, as that’s not a feature your average home or office user would need, however for the ubergeeks out there… this feature is included too.

Shipping with Firmware v1.00, the unit I had needed a Firmware Update almost immediately after it arrived. I actually ran many of the tests under the original Firmware, as the upgrade – v1.02 – was a minor one to fix a couple of stability issues from v1.01. Still, it’s always a VERY good idea to upgrade, especially since there are known vulnerabilities to common network protocols in the wild and they are making themselves felt more and more these days. Interestingly enough, the new firmware version was NOT detected when I clicked the “Check for New Firmware” button in the “Management > Upgrade” page. Instead, I found it on the D-Link website and had to do a manual upgrade. A bit odd, since the top of the page claims that “Your router can automatically detect firmware updates, but requires your authorization to install them.” – clearly, this is not the case.

Overall… I have to say, this is a stunning little bit of kit. While not as pumped as some other offerings from D-link and competitors, this one is certainly no slouch. It improved my local network traffic speeds by a significant amount and made it a breeze to have more than 2 devices connected at any given moment. It’s made my office a far more inviting place for (select) visitors with their own digital devices who can use the pre-configured guest network to access their own files from the cloud and my “public” file storage drive as well. On top of that, I can now run the security cameras at full HD resolution without any frame-jumping. It looks pretty neat up on the wall, with a tail of cables running down to the cabinet below wherein the NAS drives and power boards are tucked away. At $400 it’s a hefty investment, but one that is well worth considering, especially when some of it’s “performance peers” are priced much higher, and it’s “price peers” and far less capable.

Disclosure Statement: This unit was supplied free of charge expressly for the purposes of review by D-Link Aust/NZ. No fee was accepted or offered for this review.