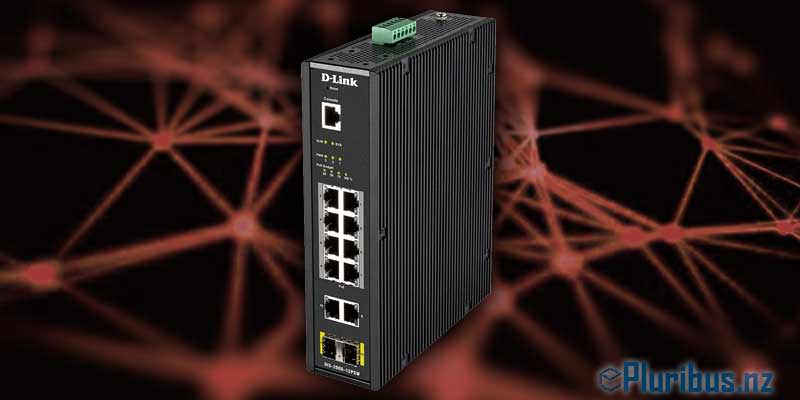 D-Link ANZ has launched two new robust industrial switches, the DIS-200G-12SW and the DIS-200G-12PSW, both sporting high EMC endurance design, a smaller fan-less case, and with wide operating temperature ranges engineered to withstand harsh operating environments. The DIS-200G-12PSW also provides an extended PoE budget which easily manages power-hungry devices like Wi-Fi Access Points and Surveillance cameras. The DIS-200G-12PSW, a compact PoE-ready switch with a total PoE budget of 130W is capable of supplying up to 30W of power per port to connected PoE-enabled devices. This effectively reduces deployment times, cable clutter and eliminates the need for dedicated power supplies enabling PoE-devices to be installed in remote locations. In fact, the new DIS-200G-12PSW is equipped with eight PoE-capable 10/100/1000BASE-T ports and also, along with the DIS-200G-12SW, two 10/100/1000BASE-T ports and two SFP ports.

The two new switches are housed in a highly durable IP30-rated metal casing to protect them from harsh environmental conditions. The high electromagnetic compatibility (EMC) rating protects the switches from unwanted electromagnetic interference when operating in environments with strong electrical or magnetic fields, such as mine sites or railways yards. Meanwhile, the fan-less design extends the life of the switches while also being able to operate in a wider temperature range of up to 75 °C.

DIS-200G-12PSW
For increased flexibility, the switches can also be mounted on a DIN rail, wall mounted or be installed in an equipment rack. They also feature 6kV surge protection on all copper ports to help prevent damage to the switch and connected devices caused by sudden power surges and lightning strikes. The in-built surge protection of up to 6kV can mitigate the damage to the switch from both indoor and outdoor devices and network connections by absorbing the excess energy while still letting the amount of power through required for the switch to operate normally. This increases network reliability, reduces repair costs and removes the need for replacement hardware in the event of an electrical surge.

Both new switches support ERPS quick failover recovery for ring topologies that ensures minimal downtime and avoids any loss of data in mission-critical deployment settings. Meanwhile, the dual power input allows for a redundant power supply to make sure the network continues to operate in the event of a primary power supply failure.