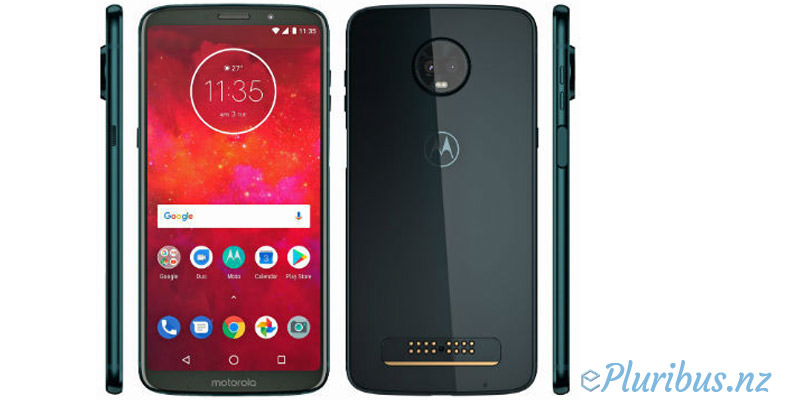 Moto Z3 Play is one of the highly anticipated upcoming smartphones that Motorola is expected to launch in 2018. The handset has been subjected to several leaks and rumours for a while now, and they suggest a design that is inline with the company’s Moto Z-series of handsets that come with Moto Mods. Motorola’s premium lineup is due for an update and leaked renders and images of the Z3 Play have surfaced on the Internet many times now. However, a new leak has showcased a Deep Indigo colour variant of the handset. Also, the smartphone is expected to remove the physical home button and position the fingerprint sensor on one of the sides.

Popular tipster Evan Blass on Thursday tweeted a new render of the Moto Z3 Play in Deep Indigo colour. In the image, the smartphone is seen to sport a side-mounted fingerprint scanner as well as a dual camera setup. Below the camera, where several handsets have a fingerprint sensor, is a static image of the company’s Batwings logo. Interestingly, the image suggests that Motorola has removed the headphone jack from the Moto Z3 Play. It also features pogo pins that are used to accommodate the Moto Mods, the firm’s interchangeable hardware modules.

To recall, live images of an alleged Moto Z3 Play had surfaced online earlier this month, revealing similar features in the smartphone. The images had suggested the presence of a dual-camera setup, side-mounted fingerprint sensor, pogo pins, Android 8.1.0, and more. The handset’s specifications were also leaked in an FCC listing in March. Also, the missing headphone jack was suggested by some case renders. A few other renders of the Moto Z3 Play had surfaced in April as well, revealing specifications of the smartphone.