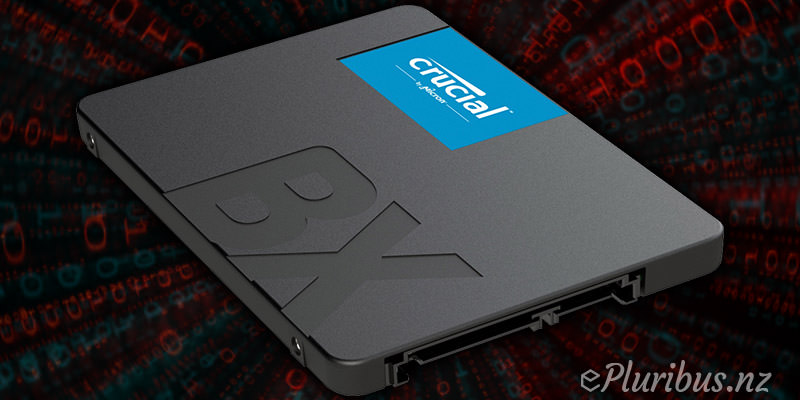 With power consumption, weight and noise becoming vital factors in determining whether your laptop is going to survive the ever-expanding need for portable computing, and decent-sized tablets still retaining premium price tags, something like an SSD is a pretty vital piece of kit to consider. That said, more and more desktop systems are converting to SSDs for their main system drives due to the speed and durability while the traditional hard disc drives (aka hard-drives) really only holding a place as bulk storage because of their growing storage sizes. For most system, regardless of physical size and portability, a 120GB SSD – the lowest capacity in this series – is going to be sufficient to take over the role of system drive, but if you want some fast storage space – for save-games, extra apps, or scratch-disk space for those apps that just can’t seem to survive without more RAM than you can physically cram into the case – then jumping up to the 480GB version is still extremely affordable with the price still well under $200 and falling. Keep in mind of course that the reported space is more than the actual available space due to some of the space being used up by formatting overheads and internal reserved space.

To be honest, when I received this unit and noted the budget price, I was expecting performance to match – much lower than the promised speeds. All too often, manufacturers tout performance ratings based solely on ideal, laboratory conditions that never come even slightly close to real-world scenarios. After digging out a spare laptop and slapping a disc-image onto it of a clean Win7 install from the archives, I was just waiting to see read/write speeds far below the 500mb/s mark. So, you can imagine my delight to see that the end results were far better than my pessimistic predictions. Without going into all the high-brow geekery that is amply covered on a number of other forums, I was impressed at how this unit actually managed to exceed the touted performance specs on one test and gave a respectable showing on the others. The big, easy test – reading and writing a single large, sequentially stored file, is always the fastest one because the drive doesn’t have to deal with multiple smaller files, which always adds to the overhead. Think about like this – the main test is like pouring water out of a jug into another jug – you never need to pause while you grab the next small jug to pour from, or into. On this test, the drive managed to push the performance markers above the promoted specs by a very respectable 9% – something I have only ever seen once before on a drive with a much higher price tag.

For the remaining tests, where the system is subjected to large numbers of smaller files, the drive held its own and gave a respectable performance, though not coming even remotely close to the specs offered in the description. However, compared to other, higher-spec’d drives I have used in the last year, this still came very close to the level of speed and performance they offered at a much more reasonable price. It does make me wonder what is coming in the next wave because this unit really did show up some higher priced unit, if the benchmarks are to be trusted. This is quite remarkable when you take into account that the reduced price is achieved by removing the onboard memory ‘buffer’ and relying solely on the new 3D NAND memory’s ability to store data at faster speeds.

Installation was a breeze – pretty much plug and play after I dropped a full drive image onto it, however, if you have to, or choose to, do a clean install you will find this drive quite responsive and it has some nice tech under the hood that will give it an edge, especially with the rampant mess known as “Installing Windows”, where literally thousands of files need to be written to the drive just to get a basic working system… and you just KNOW that it is going to take hours of downloaded updates before you will have a stable system that will allow you to do anything on it.

The drive itself is very power efficient, drawing so little power that my software could barely detect it, in contrast to a standard hard-drive that draws enough power to run a household lightbulb. The power consumption was so low, I got a conflicting result every time I tried to test it, so of course, my drive got named Schroedinger. What else could I call a drive that seemed determined to keep me in a state of uncertainty? The software you can download, for free, as an owner of a Crucial storage device, is going to give you a lot of extra tools to play with, and the ability to stay up-to-date with firmware upgrades that provide improved performance and reliability – so do explore that option on the Crucial website before you start piling on the workload.

Overall, I was highly impressed by this unit and would recommend it to anyone who wanted to upgrade the kids’ laptop or desktop system without blowing the budget and giving in to their demands for a gaming rig that could run a Mars colonisation mission on the side without even breaking a sweat. With a price tag under $50 for the bottom end, and ranging from $130-$180 on the top end, this is something quite remarkable and sure to please. However, if you want something that is going to easily handle a mind-bending level of operational time, then you will want to consider the bigger guns in the Crucial range, because this is designed for, and amply services, the entry-level and/or budget markets. If it were possible, I would give 11/10 for Value for Money because it really is amazingly well priced for what you get.

Disclosure Statement: This unit was supplied free of charge expressly for the purposes of review by Crucial. No fee was accepted or offered for this review.