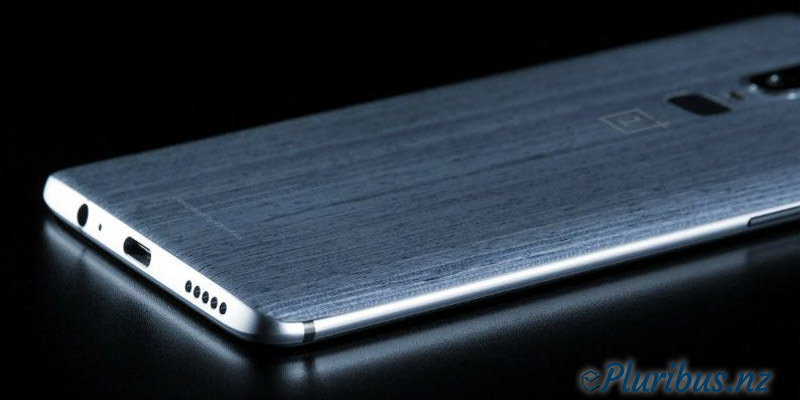 The OnePlus 6 is set to be announced no later than Q2 2018, and the Chinese phone maker seems to be gearing up to launch its latest flagship smartphone for the year. An image allegedly showing off the upcoming device has leaked showcasing a refreshing change in design. The previous version, OnePlus 5T recently went out-of-stock in the US indicating that the next flagship from the company is coming soon. While there is no information on the release date, the latest leak suggests that things are about to pick up.

Popular tipster Evan Blass has leaked an image of the upcoming OnePlus 6 and we can see some obvious changes in the handset. While some of the curves may remind of the previous iterations, the rear end of the smartphone appears to be textured like the manufacturer’s popular wood-inspired cases, except this time it appears to be built into the handset. Also, the frame appears to have an offset angle at the bottom which is different from the softly rounded corners we are used to seeing.

Interestingly, OnePlus seems to have kept the headphone jack, USB Type-C port, single speaker/mic grille yet again. However, not too many details are revealed from the leaked image indicating that we will have to wait for some time to know whether the handset will sport the iPhone X-like notch that is being introduced in almost all smartphones these days.

The small peek into the OnePlus 6 also reveals that the company has repositioned the rear camera module vertically this time, as opposed to the horizontal setup in the OnePlus 5T. If the leak turns out to be true, OnePlus 6 buyers will get rectangular fingerprint scanner at the back above the OnePlus logo, a change from the usual circular one found in the last version.

While the image leak offers a glance at the alleged OnePlus 6, when it comes to specifications the smartphone has already seen a fair amount of speculation already. A specifications sheet leak of the OnePlus 6 had suggested the presence of a 6.28-inch full-HD+ AMOLED display, a dual rear camera setup (20-megapixel + 16-megapixel), a 20-megapixel selfie camera, 3450mAh battery, 6GB RAM, and 128GB inbuilt storage. Later, a benchmark listing had confirmed that the smartphone will be powered by the latest Snapdragon 845 processor. In terms of pricing, the OnePlus 6 price for the premium 8GB RAM/ 256GB storage model has been suggested to be CAD 749 (roughly nz$800). However, the prices of the other variants of the upcoming smartphone are not yet known.