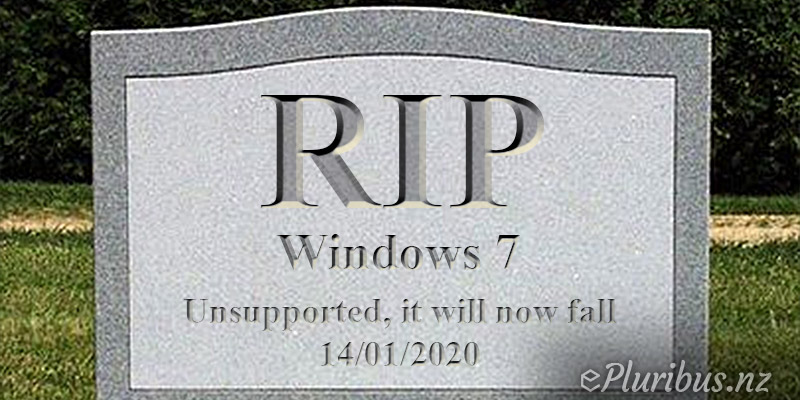 According to Microsoft’s end-of-support article for the OS, your Windows 7 computer “will still function but Microsoft will no longer provide…. Technical support for any issues…. Software updates… [or] Security updates or fixes.” In fact, it’s almost laughably passive-aggressive in its nudge to get users to buy a new PC that can run Windows 10:

It’s been over ten years since Microsoft released Windows 7, and it proved to be much less finicky than Vista – the flagship OS at the time. Data from Netmarketshare (via The Verge) shows the OS is still running on 26 percent of modern PCs.

They can’t exactly say they didn’t see this coming. Microsoft announced almost a year ago that today would be the final day of Windows 7 support. And it’s not a good idea to remain on an unsupported OS, if only because you won’t get any more security upgrades.

There is some hope for the many businesses that still run on Windows 7 PCs. Microsoft offers Extended Security Updates (ESU), for a price, which will support Windows 7 for the next three years, though the word is that this will get more and more expensive for them as time goes on. The ESUs won’t be available for individual users. So basically, upgrade or get left behind, is the message Microsoft is sending.

“While you could continue to use your PC running Windows 7, without continued software and security updates, it will be at greater risk for viruses and malware. Going forward, the best way for you to stay secure is on Windows 10. And the best way to experience Windows 10 is on a new PC.” – Microsoft

If you’re one of the people finally, begrudgingly making the transition to Windows 10, Microsoft is also quick to add that its “the most secure Windows ever built,” and that it’s “the perfect operating system for personal and household use.”

Agree, or disagree… but your choices are limited and running out fast if you want to retain access to all of the apps that have not been ported to other OS’s such as Linux or iOS.