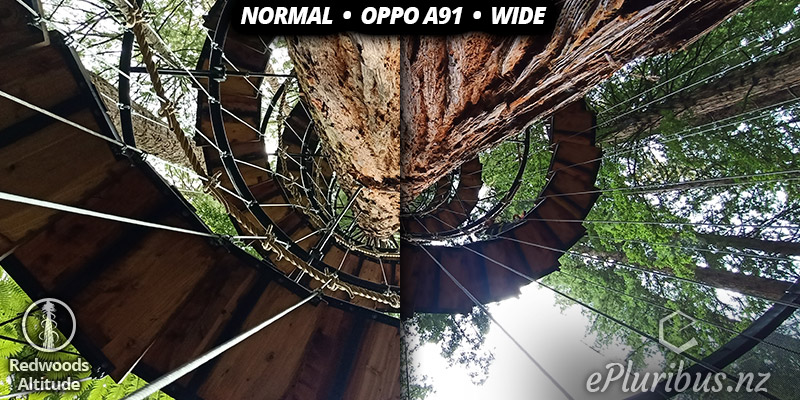 With so many new phones appearing on the market – every manufacturer seems to be taking Apple’s lead and spawning new variants every few months – it’s hard to keep track of what actually is the latest and greatest. Looking at the new OPPO A-Series A91, I wonder what is to come, because this is a fairly decent bit of kit, if you look at it overall. A 48MP camera, built-in wide-angle, 4025mAH battery and OPPO’s VOOC 3.0 charging system able to charge at 4amps instead of the more common 2.1amp, an in-display fingerprint reader and a Full HD AMOLED screen, it certainly seems to have some good specs, but when you factor in the somewhat out-of-date CPU and GPU which are both known to be somewhat power-wasteful, and some understandable but still frustrating weaknesses in the camera department… it does lose a bit of appeal.

This unit runs ColorOS 6.1 laid over Android 9. I have made my dislike of the UI clear in the past, and unfortunately nothing has really improved on that front, so I’m not going to touch too much on the software. This review’s highlights are all about the hardware, which on the whole is actually pretty good, and a few key features that are important to me in a device.

So on the good front, despite having some hardware that suffers from less-than-ideal power efficiency, having a large battery does have its definite advantages. I don’t tend to use a lot of power-hungry apps or features, such as GPS or gaming, on a day-to-day basis so for me the power profile was fairly good. I’m used to having to plug my phone in to charge every night – which, admittedly, is not actually all that good for maximising the lifespan of any rechargeable battery – but now I can go 2-3 days without having to charge it, and the ‘low battery’ warning is but a vague memory. When I do choose to use high-drain apps (Google Maps in Realtime Navigation mode is the most common) I still don’t have to risk charging it whilst using it, which is also super-bad for batteries as it causes an effect known as Parasitic Draw. This can cause excess heat, extra wear, and even total failure of the battery well before normal… oh, and it voids your warranty if it causes a failure within the warranty period. That said, a 4-5 hour drive with the phone acting as navigator, and I start to see the battery widget turning deep orange or red, and that means it’s time to plug it in again.

It should also be noted that I run my phone as a dual-SIM so that requires extra draw on the power as it connects to multiple networks at the same time, and is often jumping towers frequently as I drive around town, or between regions. For example, a recent trip to Rotorua for 4 days meant the phone was full when I left Hamilton, needed a top-up charge when I reached Rotorua, and required a charge each evening due to the phone getting far heavier than normal usage – uploading 3-5 Instagram videos each day, taking around 300 photos each day, navigator mode constantly and also streaming music a fair bit. This kind of usage would have killed my previous phone in less than 12 hours, leaving me deviceless for most of the evening as it recharged. Yes, I love this bigger battery… but how they manage to shoehorn it into such a sleek case boggles my mind.

Having been a fan of another phone brand for so long, and only recently getting to spend a prolonged amount of playtime with an OPPO handset that is less based on the Selfie Generation, this was quite the interesting experience. I recently took a ‘long weekend’ trip to Rotorua, and had a variety of lighting options to explore – ranging from high-contrast sun-&-shade in the Dansey Scenic Reserve, to night-time in a steaming outdoor pool. Overcast in the day, as well as indoors at night were also tested… and I have to say I was fairly impressed. However, I do use my phone more as a camera than anything else, so for me the camera UI is of paramount importance, and the limited modes available were, for me, quite the let-down. You have three main modes – video, photo and portrait – and there are five options in a popup menu – Night, Pano, Expert, Time-lapse and Slo-mo. Some of these are over-ride modes in themselves, but some, such as ‘Night’ and ‘Expert’ work across modes, so I struggle to see the rationale behind the layout.

What I found lacking was advanced modes. On my previous phone, there were at least a dozen options including stunningly useful modes such as ‘Silky Water’ and ‘Star Tracks’ which are modes I love to use on scenic getaway trips. With that phone now dead, so too are some of my best photographic tricks. With no obvious way to expand the menu with downloadable options and enhancements, this unit suffers a somewhat reduced appeal for me, which is a dire shame because in almost all other aspects it met or even exceeded my expectations.

The two modes that really did showcase themselves well though, were Timelapse and Slo-Mo. The Timelapse was astounding, compressing the video 10:1 – a 10min video was chopped down into a 1min result, making for some great footage that can make scenic photos into something really quite stunning. I built a little turntable out of an old clockwork egg timer, and can now shoot some fun hyperlapse footage too. (Hyperlapse is a combination of a timelapse shot while the camera is also in motion. It’s not new, but the results can be astounding to watch.) The Slo-Mo mode was great for capturing the fleeting moments as something fast happens. On one of the adventures I did in Rotorua, I caught a Black Robin flitting over and grabbing a mealgrub off my outstretched hand. It was too fast to see unaided, but in Slo-Mo you could even see him fold up his wings and stall in midair before darting forward, grabbing the grub and zooming away. If Leonardo Da Vinci had been able to slow down time this way, he might have managed to see the secret to building a working flight suit!

Another factor in the camera that I loved was the built-in wide-angle/macro lens. Normally, I would use a set of clip-on lenses to get a wide shot or a macro, but they become tricky to attach and align quickly, meaning I missed so many great shots as the subject or the scene changed while I was digging around for the right lens and trying to get it aligned with the right camera. The pitfalls of having multiple cameras. However, with this unit I simply tap an onscreen button and a second later, the wide-angle camera – at 48mp – is active and it doubles as the macro lens too! This has enabled me to grab some great shots on-the-go that I never would have been able to get under the old system. My only slight niggle was that when switching out of wide/macro, you have to go back into the settings to reactive 48MP resolution. It defaults back to the lower resolution. There is a valid technical reason for this, apparently, but I struggle to see why you can’t tell it “When switching, reactive 48MP mode by default” – if it can be done by a human touching the screen, it can be automated by the system, surely?!

Charging is pretty impressive, if you use the supplied VOOC 3.0 adaptor. Getting the phone from 20% – the lowest you should let your battery get if you want to avoid it shutting off features to reduce consumption – to 60% took less than 30 minutes, and the phone was all topped up when I came to check on it 30 minutes after that. Charging it on a standard USB 3.0 port gave similar results, with the battery showing 90%+ after an hour or so. I even got decent recharge off a portable power bank with it going from 18% to 45% in 40 minutes on the equivalent of a USB 2.0. Not super impressive, but that’s more than enough if you are on the road and realise you really need to call a tow truck, or ring ahead to let your destination know you’re running a bit later than planned.

One of the things I have always hated about fingerprint scanners on phones is the lack of thought when it comes to placement. Having a fingerprint scanner right below the camera on the back always results in smudges on the lens as you try to locate your finger correctly while unable to see it. So I was quite cautiously optimistic when I saw this phone had the under-screen optical scanner… and let me say this – I’m a convert! I encrypt all my main apps, especially social media and any that can earn/spend my coins, so to be able to lock then behind a quick finger-press is brilliant, and now I doubt I will ever even look at a handset that doesn’t have the fingerprint reader on the front. It works really well, but is limited to only having room for a single print to be stored. Sometimes, I have to juggle things to free up the correct finger, and having the ability to store a secondary print would be handy – no pun intended. Other devices have it, so it must be possible, which makes me wonder what the cost is, that it’s not a standard across all devices now.

Overall, this phone is pretty good. If you hunt around, you can find some price deals, but even at full price it’s a pretty impressive phone. It needs some adjustments to really make it “wow” but it’s not an overpriced slouch by any means. The photographic modes need some work, however they perform better than my ‘minimum standards’ so that’s a bonus – the wide-angle/macro being the obvious stand-out. I would have liked to have seen an optical zoom, as digital can be quite rubbish, but the image-stabilisation balances that out and at anything under 2x zoom the quality is still workable. This is a smartphone you likely won’t regret buying as it has a very good balance of usability and affordability.

Disclosure Statement: This unit was supplied by OPPO NZ expressly for the purposes of review. No fee was offered or accepted for this impartial review.