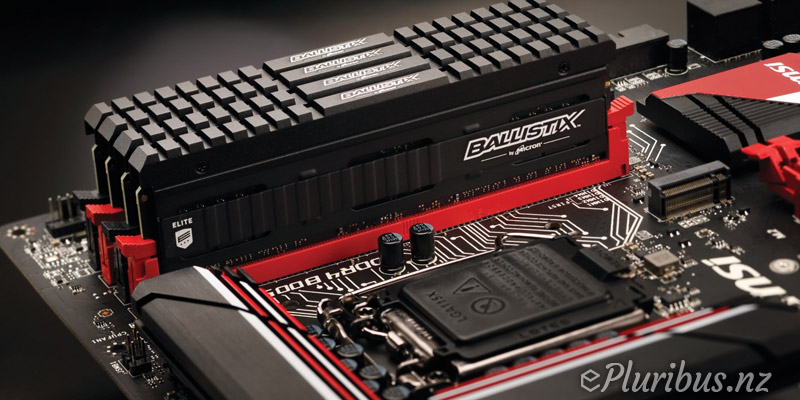 A memory upgrade can help fix a slow desktop or laptop, but it can be daunting for those who have never installed computer hardware before, especially when you have to choose between 4GB 2400 MT/s, 4GB 2666 MT/s, 8GB 2400 MT/s and 8GB 2666 MT/s. Even if you know about densities and speeds, how can you tell which option is suitable for your needs? And should you prioritise bigger or faster memory?

Crucial director of DRAM product marketing Jim Jardine explained, “If we take an 8GB 2666 MT/s memory module as an example, the 8GB is the density and the 2666 MT/s is the speed. Density, also known as capacity, is the maximum amount of data the module can hold at once. The speed is the amount of commands (megatransfers) that the memory can send to the central processing unit (CPU) per second (hence MT/s). Both density and speed measures can vary from module to module, so it can be difficult to choose which memory module is right for you.”

When you’re forced to decide between a bigger density or a faster speed, according to Jardine you should choose density. Although, it’s a matter of priority, not an either/or situation – density is the first priority, speed is the second.

He added, “DDR4 memory speeds generally range between 2133 MT/s and 2666 MT/s and DDR3 memory (common in older systems) speeds range from 1066 MT/s to 1866 MT/s. In general, if your computer’s CPU can only run memory at a maximum speed of 2400 MT/s, then there is no reason to purchase faster memory as your system automatically reduce the speed to the maximum it supports, in this case 2400 MT/s. Similarly, with densities, a 16GB memory module would not be compatible with a system that can only support 8GB – so it’s important that you pick the speeds and densities that match your system.”

Depending on how you use your computer and what your computer is capable of, you’ll experience the benefits of a memory upgrade differently. Although it’s difficult to separate density from speed and vice versa, you would see a noticeable difference if you added more density vs. higher speed. So, what are some everyday applications that will benefit from a memory boost and how do you determine how much you need?

For word processing, whilst going from 2GB to 4GB or 4GB to 8GB density would increase the responsiveness of the letters appearing and improve multitasking, going from 2400 MT/s to 3000 MT/s would not show many performance gains. Therefore, you don’t need much DRAM to make processing smoother, you only need enough to give your computer extra room above the active data of your operating system.
Jardine’s recommendation is 8GB 2400 MT/s.

Web browsers are notorious DRAM guzzlers because they use so much active data and as a result, they’re often guilty of slowing down your computer. More density or speed in your memory won’t affect the speed of your internet connection, but your computer will run browsers more efficiently if it has sufficient DRAM capacity.
Here Jardine recommends 8GB 2400 MT/s.

When streaming video, like web browsing, internet connection plays a more important role than memory. However, your computer needs enough GBs of memory for your system to run smoothly, preventing any videos freezing or buffering.
Jardine’s recommendation is 8GB 2666 MT/s.

Photo and video editing apps such as Photoshop, Affinity Photo and Cyberlink PhotoDirector require more system resources than other kinds of software and if you don’t have at least 8GB of DRAM, your computer may not be able to run them at all. Since they flood your system with active data, you need enough GBs or DRAM to hold it all, and enough speed to process all the commands. Demanding apps like these will also benefit from a solid-state drive (SSD), which is much faster than a regular hard drive.
Jardine recommends 16GB 2666 MT/s here.

Many games require at least 4GB of DRAM to run and games likes Far Cry 5, Destiny 2 and Call of Duty: WW2 recommend at least 8GB to run them well. Because games use so much active data, memory speed can make a huge difference to the speed of gameplay. For best results 16GB and above is advised. Some gamers overclock their system (speeding up the processor’s clock cycle), but it takes technical knowledge, time researching how to do it and risks voiding the computer’s warranty.
Jardine’s recommendation is 16GB+ 2666 MT/s.

Faster speeds are a way to squeeze every ounce of performance out of memory-intensive workloads resulting in fewer delays and therefore saving time. If you’re using your PC or laptop for work, for example, fewer delays equals more efficiency and therefore more productivity. Paying that little bit extra for a memory upgrade now, will also be able to save money in the future as there will be no need to buy a brand new system every time it starts to slow down and become sluggish.

These benefits are often imperceptible to a person who casually uses their computer but would be more noticeable in server deployments that are constantly bombarded with massive memory demands. If you’re a hardcore gamer, that uses memory-intensive apps and your margin of error is on a scale of microseconds, then faster memory speeds paired with sufficient memory are worth paying that little bit extra for. Gaming memory modules, like the Ballistix Elite range, have even higher speeds of up to 3200 MT/s to cope with increased frame rates of high-quality games, as well as improving the responsiveness and optimising latencies.

Jim Jardine concluded, “When you’re shopping for DRAM, the range of speeds available to the average PC user aren’t significant enough to truly notice a difference. Similarly, if you intend to use apps that flood your computer with active data, it’s likely that you don’t need the fastest memory module on the market. First, focus on maxing out your system’s memory density, then find the speed that best fits your needs and your budget. So, don’t let densities and speeds trip you up, consider all of your memory options and get a faster PC that will speed up your processes.”