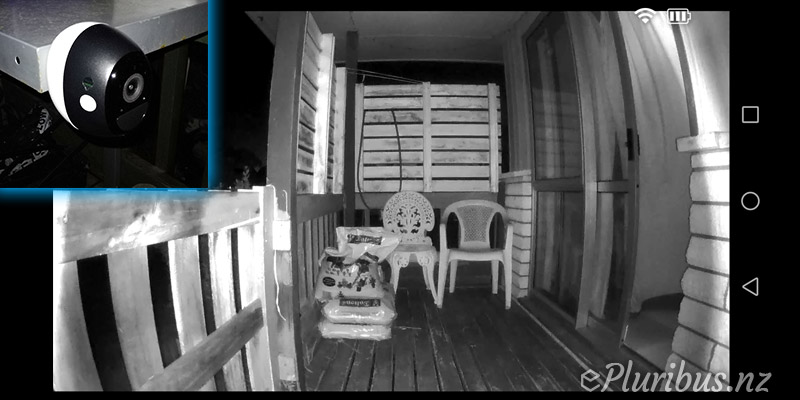 Opening the box, the first thing that struck me was “There’s a lot of kit in here, but not as much as I would have thought.” Two remote cameras, the hub unit, a microUSB charging unit for the cams, another for the hub with a round power plug, two mounting ‘domes’ for the cameras with screws and grommets for soft plaster walls, an ethernet cable and a small Quick Start guide. The one thing in the box that surprised me a bit, until I had a good think about the physics, was the addition of a single mounting unit that had a tripod screw at the top on a ball-joint. It took me a moment to realise that this would be best for ceiling-mounting a camera, and the only curiosity that remained was the question “Why only one?” It seems to me that there are likely to be just as many who would want/need to ceiling-mount both cameras as those who don’t want to mount any that way, so… why not two? Or none, and make them an optional extra as a pair? Who knows, but either way I am glad I got at least one to test with.

Setup is a breeze – all you need to have beforehand is a router with an empty ethernet port, power at that site, and possibly a drill and screwdriver if you want to wall or ceiling-mount the cameras. Everything else is in the box. So to get it running, plug the hub into power and connect it to the router with the supplied cable. If you have any D-Link home hardware, you likely already have the app, if not it is a quick QR code scan away. Open the mydlink app, log in, start to “add a device”, then scan the QR code on the back of the hub, and follow the prompts from there. You’ll be looking out of a pair of wireless eyes in no time – it took me around 10 minutes but that was because I spent FAR too long playing with all the settings to see what they all did. If I had only done the bare basics and left the settings at default, then it would have taken a lot less.

Mounting the cameras is quite clever, though not new. First, put a screw in the wall where you want the camera to sit. The mounting unit is the dome-shaped doohickey with the “keyhole” screw-slot in the flat side. Slot that over the screw – adjust the screw accordingly to ensure it’s a snug, wobble-free fit – then just stick the camera to it. It is a magnetic coupling with plenty of strength holding the two units together. Because of the rounded dome shape, you can simply slide the camera around to point where you want it. This magnetic coupler also means that when it comes time to recharge the cameras, you need only pull it free, charge it, and replace it without needing tools of any kind. The design of the cameras also means that if you want to run a power cable up to it, you can. Don’t leave it permanently plugged in and charging though – that’s not good for the batteries – instead, control the charging by switching the AC adaptor on and off at the wall as needed.

While the built-in 2-way communication is great stuff, and becoming a mainstream core feature of most of the better devices in the market, a novel feature that I can’t wait to see/hear in action is the honking-great siren you can configure to go off when unauthorised motion is detected. Rated at 100dB, that’s almost as loud as a jet engine. It’s louder than your average band gig, and almost as loud and painful as the mother-in-law on a bad day. Be sure to set Privacy Mode times appropriately, otherwise the next time you go to the loo in the middle of the night… you may find part-way through that you have no further need of it.

As part of the package, you will get a free 12-month premium subscription to the cloud storage platform so you can store unlimited videos for up to 14 days before they expire, giving you global access to your event-triggered videos. Out of town attending a meeting and someone walks where they shouldn’t? Expect your phone to notify you and send you a link to the footage wherever you are. The annual cloud package is fairly affordable, but consumers may be OK with the free plan after that, and simply attach a portable hard drive to the hub’s USB port, or slide a high-capacity microSD card into the slot on the side of the hub. These won’t help you much in cases where the hub and/or drive are taken or destroyed, but it’s still better than no storage at all.

One of the biggest issues I have always had with IP cameras that utilise/offer ‘motion sensing’ features is their lack of follow-through on the promise. Yes, motion sensing is there, and it usually can be customised… but I have invariably found it falls short of the promise and/or does odd things, such as resetting itself to full-screen motion tracking instead of only the selected zones, or triggering when a cat walks through the frame, but not when a human does. On these units, when I went to explore the motion-tracking settings I was highly surprised to see a simple “Sensitivity” slider and nothing else. Much experimentation with this slider has revealed that… apparently, the cat that lives in the next building is the only thing that comes into the parking area or our office patio, after 5pm. Thanks to the excellent night vision capabilities – high resolution and illumination that covered the entire relaxation area outside – we could easily identify the exact cat every time! I started by improvising a small cardboard sleeve to allow the camera to look through the glass without being hit by the reflected glare of the IR LEDs, that took all of 5 minutes, but it turned out that the quickest option was to simply attach it to the BBQ via the magnet in the back of the camera! (See inset of the linked image.)

What struck me the most is that this camera didn’t send off a ‘motion detected’ alarm after sunset, despite the neighbourhood cat knocking over the rubbish bin looking for the pizza remains. Because these cameras use infrared heat sources to target motion-activation, you won’t fall victim to notification-spam to let you know that “a bunch of pixels changed suddenly, so something moved, it’s scream-time!” every time a tree wiggles in the breeze. Of course, these being heat sensors, they need direct access to the target without glass in the way… so the patio cam didn’t detect the invading cat. That’s not the devices fault – I am playing with it outside of the situation it was designed for, after all. It was pure chance that I happened to be looking at my phone when the cat came back… he couldn’t stay away. Mounting these cameras indoors means that if you leave a window open and the breeze wiggles a potted plant or a curtain – nothing to bother with… but as soon as a heat-source moves in-frame… ALARUMS GALORE! (Literally, if you really want to go hard-core. Because this hooks into Google Assistant, Amazon Echo and also the IFTTT macro system, so you can trigger multiple devices to activate in cases on home invasion. Make the lights flash, trigger off the hub siren and any add-on sirens you may have, send an automated 111 distress call, etc.)

One of the fun things I discovered almost by accident, was that my phone has a steel shell inside the leather case-cover I have on it. Why is that relevant? Because these units have the magnetic ‘grabber’ in the back of the camera, not in the mounting base… which means I could stick my phone to the back of one and use it as a ‘night vision’ screen. With the two devices magnetically bound, it was a simple matter to hold the pair in one hand and pan it around to navigate while still keeping one hand free to manipulate doors, etc. Such an odd, but handy discovery, that has caused me to reposition one of the cameras closer to my main office so that if the power goes off while I’m working at night, I still have my own night-vision device that can be quickly assembled, even in the pitch darkness. It also means that the camera hub has been placed on a UPC system, to ensure comms between the camera and my phone are maintained. Some form of ‘direct ad-hoc network mode’ would also be good to see in future hard/firmware upgrades. That way the cameras can be hooked directly to the mobile in case of a hub failure too.

Overall, this started out to be the single best multi-cam system I have come across in years – quick and easy to use, especially for non-technical folk. Despite that, over time, I started to have a few minor issues that have eluded diagnosis so far – there are times when I try to connect to one of the cameras for a live-view with the app, and it can take anywhere from 30 seconds to 8 minutes before I am actually seeing what the camera is transmitting. There appears to be no pattern to the lags, and network diagnostics can’t point to any issue other than a reduction in meaningful communication between the hub unit and the cameras. Still, I daresay these issues will be fixed shortly with a firmware update or two because the hardware seems to be pretty robust. Top notch effort, D-Link, can’t wait to see how you push the bar up higher on the next round.