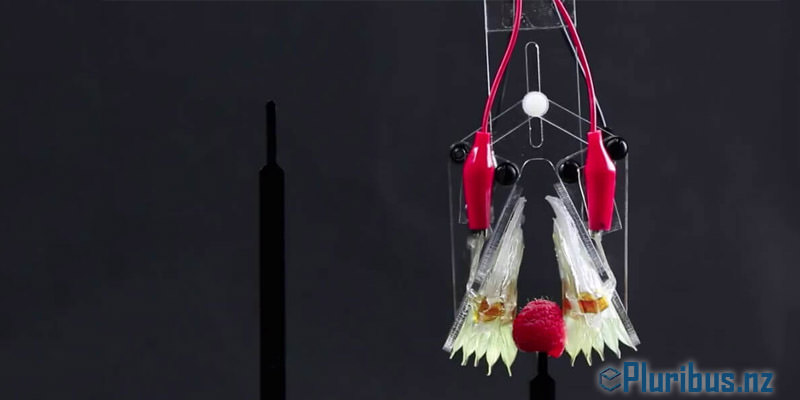 Jerky mechanical robots are staples of science fiction, but to seamlessly integrate into everyday life they’ll need the precise yet powerful motor control of humans. Now scientists have created a new class of artificial muscles that could soon make that a reality.

The advance is the latest breakthrough in the field of soft robotics. Scientists are increasingly designing robots using soft materials that more closely resemble biological systems, which can be more adaptable and better suited to working in close proximity to humans.

One of the main challenges has been creating soft components that match the power and control of the rigid actuators that drive mechanical robots – things like motors and pistons. Now researchers at the University of Colorado Boulder have built a series of low-cost artificial muscles – as little as 10 cents per device – using soft plastic pouches filled with electrically insulating liquids that contract with the force and speed of mammalian skeletal muscles when a voltage is applied to them.

Three different designs of the so-called hydraulically amplified self-healing electrostatic (HASEL) actuators were detailed in two papers in the journals Science and Science Robotics last week. They could carry out a variety of tasks, from gently picking up delicate objects like eggs or raspberries to lifting objects many times their own weight, such as a gallon of water, at rapid repetition rates.

“We draw our inspiration from the astonishing capabilities of biological muscle,” Christoph Keplinger, an assistant professor at UC Boulder and senior author of both papers, said in a press release. “Just like biological muscle, HASEL actuators can reproduce the adaptability of an octopus arm, the speed of a hummingbird and the strength of an elephant.”

The artificial muscles work by applying a voltage to hydrogel electrodes on either side of pouches filled with liquid insulators, which can be as simple as canola oil. This creates an attraction between the two electrodes, pulling them together and displacing the liquid. This causes a change of shape that can push or pull levers, arms or any other articulated component.

The design is essentially a synthesis of two leading approaches to actuating soft robots. Pneumatic and hydraulic actuators that pump fluids around have been popular due to their high forces, easy fabrication and ability to mimic a variety of natural motions. But they tend to be bulky and relatively slow.

Dielectric elastomer actuators apply an electric field across a solid insulating layer to make it flex. These can mimic the responsiveness of biological muscle. But they are not very versatile and can also fail catastrophically, because the high voltages required can cause a bolt of electricity to blast through the insulator, destroying it. The likelihood of this happening increases in line with the size of their electrodes, which makes it hard to scale them up. By combining the two approaches, researchers get the best of both worlds, with the power, versatility and easy fabrication of a fluid-based system and the responsiveness of electrically-powered actuators.

One of the designs holds particular promise for robotics applications, as it behaves a lot like biological muscle. The so-called Peano-HASEL actuators are made up of multiple rectangular pouches connected in series, which allows them to contract linearly, just like real muscle. They can lift more than 200 times their weight, but being electrically powered, they exceed the flexing speed of human muscle.

As the name suggests, the HASEL actuators are also self-healing. They are still prone to the same kind of electrical damage as dielectric elastomer actuators, but the liquid insulator is able to immediately self-heal by redistributing itself and regaining its insulating properties.

The muscles can even monitor the amount of strain they’re under to provide the same kind of feedback biological systems would. The muscle’s capacitance – its ability to store an electric charge – changes as the device stretches, which makes it possible to power the arm while simultaneously measuring what position it’s in.

The researchers say this could imbue robots with a similar sense of proprioception or body-awareness to that found in plants and animals. “Self-sensing allows for the development of closed-loop feedback controllers to design highly advanced and precise robots for diverse applications,” Shane Mitchell, a PhD student in Keplinger’s lab and an author on both papers, said in an email.

The researchers say the high voltages required are an ongoing challenge, though they’ve already designed devices in the lab that use a fifth of the voltage of those features in the recent papers.

In most of their demonstrations, these soft actuators were being used to power rigid arms and levers, pointing to the fact that future robots are likely to combine both rigid and soft components, much like animals do. The potential applications for the technology range from more realistic prosthetics to much more dextrous robots that can work easily alongside humans.

It will take some work before these devices appear in commercial robots. But the combination of high-performance with simple and inexpensive fabrication methods mean other researchers are likely to jump in, so innovation could be rapid.