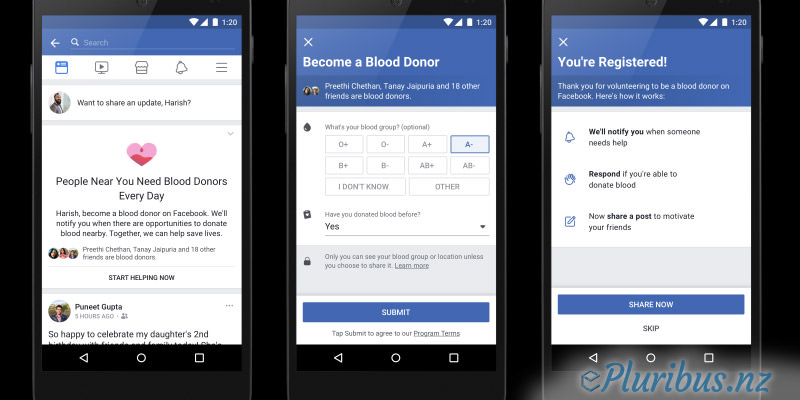 More than six million people have signed up as blood donors on Facebook’s “blood donations feature” in India, making it the largest online blood registry in the country, a company executive said on Thursday. “We are part of the team at Facebook that is focussed on building safe and supportive communities. We saw a lot of activity on the platform where people sought help regarding blood donation. This was our motivation to launch the initiative,” Hema Budaraju, Product Manager, Health at Facebook, told IANS.

Facebook organised its “Legendary Blood Donation Drive” event with non-profit NTR Trust in Hyderabad on Thursday. “Our research suggested that when people have better information and tools, they are more willing to donate blood — and it is easier for people who need blood to find donors,” Budaraju added.

Since the launch of the feature, Indians have used it to post thousands of requests for blood donation on Facebook and the social media giant witnessed a lot of people finding at least one donor using the feature. In October 2017, Facebook launched the feature in India. NTR Trust joined hands with Facebook to help bridge the gap between blood donors and patients and hosted a drive, which included more than 250 blood camps across the country.

Budaraju said blood banks and non-profits across the country were now using this feature to help raise awareness of voluntary blood donation camps. “They create events on Facebook for their camps and nearby donors are notified of these opportunities to donate blood,” Budaraju added.

She said Facebook has worked with several hospitals and firms like NTR Trust, the Federation of Indian Blood Donors Organisations (FIBDO) in Kolkata, Giants NGO and several colleges in Mumbai but “is yet to work with the government”.

“By raising awareness and growing the number of blood donors in India, Facebook wants to make it easier for people and organisations to give and receive blood,” the Facebook executive told IANS.

People who are in need of blood can write a special post on Facebook with the information. Facebook will then notifications to the nearby donors who in turn can respond on the platform or contact the seeker on phone. Users can also go to partner camps and donate blood, Budaraju added.