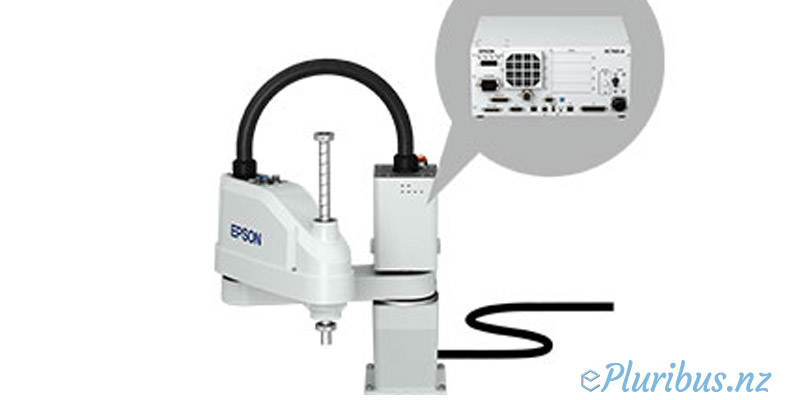 Epson, the global market share leader in SCARA (horizontally articulated) robots for seven consecutive years*1, has begun a global rollout*2 of the T6 robot. Epson SCARA robots in the T series, which have a built-in controller and are designed for maximum simplicity of installation and usability, lower the barriers to automation on the customer’s end and are perfect for automating simple material handling tasks.

The T6, a brawnier version of the popular T3, boosts productivity by handling payloads up to 6 kg, making it ideal for customers who want to use a T series robot to transport larger, heavier parts or to carry multiple parts at one time.

T series applications
1. Automation of test machine loading/unloading and other simple processes that previously relied on people because automation did not make financial sense.
2. T series robots can be used instead of multiple low-cost single-axis robots that take up a lot of space and require troublesome adjustment and maintenance work. Users will save space, reduce setup time, and minimize downtime.

T series features
1. Built-in controller that saves space and simplifies robot setup and redeployment
The integrated controller eliminates the need for controller setup and cable routing, making system setup and redeployment much faster and easier. With a separate controller no longer taking up space, the entire robotic system is more compact, allowing manufacturers to use their factory floor space more efficiently and productively.

3. I/O ports for end-effectors that simplify cabling
The end-effector I/O ports are provided near the end of the robot arm and supplied with 24 V power. These ports make setup easier by simplifying cabling, power, and other connections to the end-effector.

4. Shorter cable duct that improves stability
The robot is designed with a shorter cable duct at the top of the robot. The shorter duct remains stable, with little vibration, even during robot operation, and cabling can easily be routed through the duct.

For additional information about Epson robots go to: http://global.epson.com/innovation/core_technology/robotics.html

*1 Market share based on revenue and unit sales of industrial SCARA robots, 2011-2017. (Source: Fuji Keizai “2012 – 2018 Reality and Future Outlook of Worldwide Robot Market”).
*2 Contact your local Epson sales company for the launch date in your region.
*3 A rated current of at least 20 A is required when operating the robots from a 100 VAC power source.
*4 Based on comparisons with Epson LS6 (and an RC90 controller) and T6 robots running the same pick-and-place operations. This comparative data is from actual measurements and identical energy performance is not guaranteed.