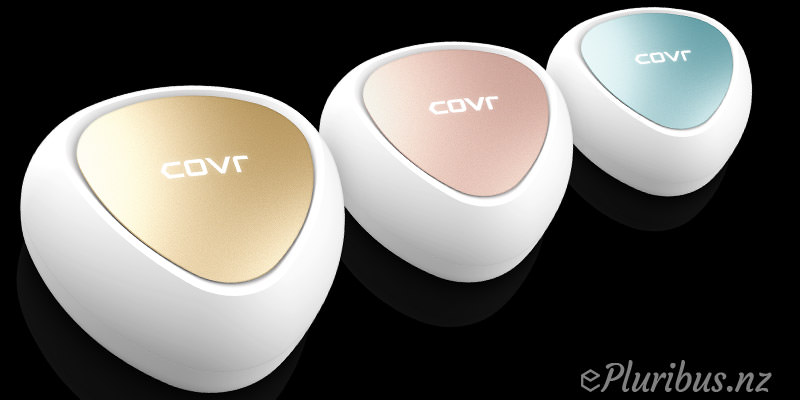 If you live in a sprawling or multi-level dwelling, you have probably discovered how annoying it is to have your WiFi cut out on you in patches as you move around. If you have a single access-point (AP) in the building, chances are you have come across a dead-zone or two, and have either adapted your behaviour – no more checking facebook while you’re in the bath or loo, no streaming to the mobile when you’re outside, that kind of thing – or you have given up and bought a range extender or a second WiFi AP device to give you a second coverage point. The flaws in that plan are obvious – a second network means you lose connection as you move between coverage zones. While not the end of the world, and better than a complete blackout, there’s no need to suffer the hassle any more.

Introducing the D-Link COVR – a complete, easy to set up home mesh network in a tidy, stylish package. The first thing you’re going to notice is that it comes in a shelf-filling box, covered in eye-catching artwork, and all the key information you need to make a smart buying decision. One of the best, and for me the most compelling, was the little gold shield on the front, announcing that you have 24/7 technical support via a toll-free number. If that isn’t a reassuring sign, I don’t know what is.

Comprising of three small mini-routers that plug in around the building, you get a single network that flows smoothly between the three nodes. As you roam, the system automatically adjusts your connection to give you the best possible speeds, without any drop-outs or blackspots. Acting as a single hive-mind if you will, this mesh network uses MU-MIMO technology to monitor and maintain connections to multiple devices, routing the data to whichever base site will give the best signal strength and speeds to ensure that it can cover the maximum number of devices and minimising, if not eliminating, buffering or bottlenecks. It also tracks your device movement, preparing the network for a clean switch-over without any drop-outs as you transition from the coverage zone of one base unit to another. It really is a very neat system.

Powered by 3 individual power adapters that output 5 volts at 3amps – far more than usual, so I would have expected a dedicated round pin-plug, but no. In an act of awesome multifunctionality, D-Link went with USB Type-C instead, meaning if you have one of the newest non-Apple smartphones, chances are you can use one to charge your phone in an emergency. I am a huge fan of ‘the little things’ like that, which make a product more than a 1-trick pony.

On the flip-side, you need to keep in mind that you are powering three devices instead of one. This trade-off means a tiny bit of extra power used, but hugely improved connectivity – you need to assess for yourself if that is a trade you want to make. For me, the answer was a resounding YES as I have never experienced such a stable level of connectivity before. At last, I can roam the property doing the lawns with the wireless headphones on, and not lose the tunes as I work the further corners of the property.

Setup was quite simple, thanks to the mydlink app, which walks you through all the steps, from connecting the main node (Marked with an ‘A’) to your modem, through to getting all your devices connected again. I did find the app a little laggy in some steps, but it could be the result of a ‘noisy’ WiFi environment at this location. Be prepared for the possibility of a few re-tries at some steps, and you’ll be fine.

The master node and two secondary nodes are pre-paired for a speedy mesh deployment, and security of the network was on par with all the other offerings out there. As usual, it is a good idea to keep checking for firmware updates for the next 6-12 months, ensuring your hardware has the best onboard protection possible. It’s worth registering the hardware on the D-Link site too, as that gives an added layer of usability during the ongoing maintenance cycles.

Network speeds were slightly improved over the previous WiFi AP, but where it shone out was the coverage… ‘top speed’ zones still covered all of the main spaces in the house, but also out over most of the property, not quite reaching the boundary fences. Any guests at the next BBQ I allow access will be able to enjoy solid speeds out on the back patio – something that was previously impossible.

I was pleased to see that each of the secondary nodes had two gigabit ethernet ports, ensuring your non-WiFi devices can benefit from the lack of need for long network cable snakes running along your walls and floors. The master node also has two ports, but one of them is occupied by the connection to your modem, leaving you one extra port to connect to a switch or media device.

Overall, these are stunning! The concept of Synergy – where the resulting combination is somehow more than just the sum of its parts – applies beautifully here. Three smaller units, working in harmony at a distance from each other, creates a result that far exceeds expectations. What excites me more is that this is a scalable solution, meaning that you simply buy more secondary nodes and activate them on your network to extend the mesh out over a wider area. I’m very curious to see how far someone could expand it.

Disclosure Statement: This unit was supplied free of charge expressly for the purposes of review by D-Link. No fee was accepted or offered for this review.