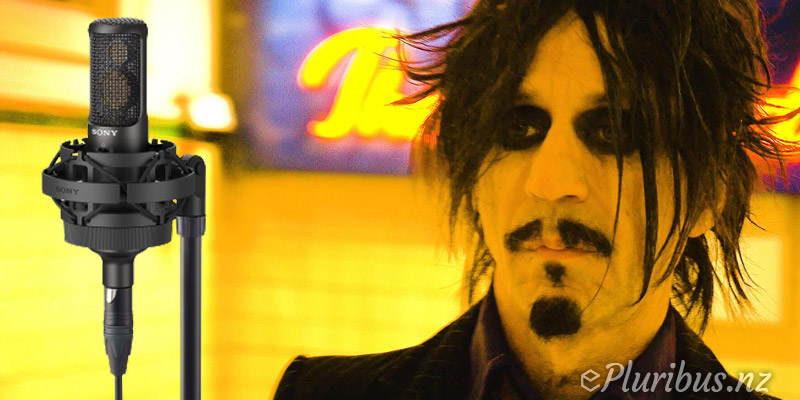 The music of singer, composer, performer and producer Steve Balbi mines a kaleidoscope of life at the margins. Transcending rock and pop while coalescing sentimentality and soul, Balbi bespeaks Bowie and Dylan in melody and verse, exploring the heterogeneity, refinement and dirty rotten groove of Radiohead. For one of his more high-profile gigs, The Big Red Bash in Birdsville, featuring Midnight Oil, The Living End, Casey Chambers and more, Balbi has decided to record the show with Sony high res mics.

Balbi explained, “David Green from Sony was aware of my work as a producer, and as a performer as well I suspect, so he approached me at a show one night. We got to talking about recording, of course. Recognising that I’m an inherently instinctual artist; for me recording to be all about feel and aesthetic he became curious to know what I would think about the Sony 100 Series High Res Microphones on that level, in my world.”

That meeting of minds greatly affected Balbi and his decision to use Sony’s unique high res mics for his future projects.

He continued, “I believe that the unconventional often creates the most interesting art, so I’m always looking for something different. I tried out two pairs of the high res mics; a C-100 side address dual diaphragm pair and a pair of end address pencil condensers. At the time I was doing what I call a low fi sounding track, so I used the C-100 mic on the vocal. It delivered an amazing effect, to have the vocal so crystal clear, almost sounding like the voice was being sung at point blank to my ear. The music was kind of dreaming away in another room, which was quite a stunning effect that kind of gave me a natural focal point.”

According to Balbi the C-100 mics sounded so incredible, he literally found it hard to believe his ears. He added, “It wasn’t just the C-100 mics. So too the pencil room mics on drums, which are also great as a second mic on acoustic guitar. The pencil condensers, both the cardioid and omnis sound sublime on piano, so I’m really looking forward to recording strings in the next few weeks, as I know they will sound amazing. These mics have a strange feel to them, almost spooky. It would appear that I have become used to only receiving a limited frequency, however these mics give more highs and lows, which is odd at first, then after a while it is just so beautiful. These high res mics are very musical. They have given me another angle to work with; options and avenues that my already healthy mic kit has not provided.”

Balbi has used the Sony high res mics on his new solo recordings; for an orchestral composition with strings, horns and timpani, which became the theme song for Fox Cricket in the summer; Glenn Shorrock’s new album; the Spectre Tapes EP, the Electric Hippies new recordings, as well as a new version of his latest single, ‘Modern Love’, to promote Psykinetic’s new ground-breaking eye-control technology – something we will hear more of from him at a later date.

Balbi said, “I’m using the mics on the Legendary Dustbuckles too. So yeah, I’m using them on just about everything I record and produce right now. I’ve started to use them as a focal point sonically. Sure, this can be done in many ways when mixing, but I am a source man, so I like to record the sounds that I hear and feel. They generally stay that way, rather than being manipulated after the fact. Now this is generally speaking, since I’m known for voluntarily destroying perfectly good sounds before I record it. To me this is a great way to use these mics. For instance, imagine the trashiest, most rubbish sounding steel-stringed guitars known to man, then putting the most beautiful mic in front of it… BOOM!”

All of these experiences have lead Balbi to make the decision to use the Sony high res mics to record his show at the upcoming Big Red Bash in Birdsville, featuring Midnight Oil, The Living End and Casey Chambers.

He explained, “I have compared the Sony Series 100 high res mics against other, commonly used big names in the market, and I can confirm without reservation that the Sony ones offer something very special that I have not heard with any other mics. A HD microphone is just different. In this sense, I’ve an incredible new tool in my kit and for this reason, these mics have given me a distinct edge. Listen out as it’s this edge you’ll hear on all of Balbi’s future recordings, including the Big Red Bash in July, courtesy of the amazing Sony High Res Microphones.”

The Big Red Bash will be held in Birdsville, Queensland from 16-19 July. For more information go to: http://www.bigredbash.com.au/bigredbash/index