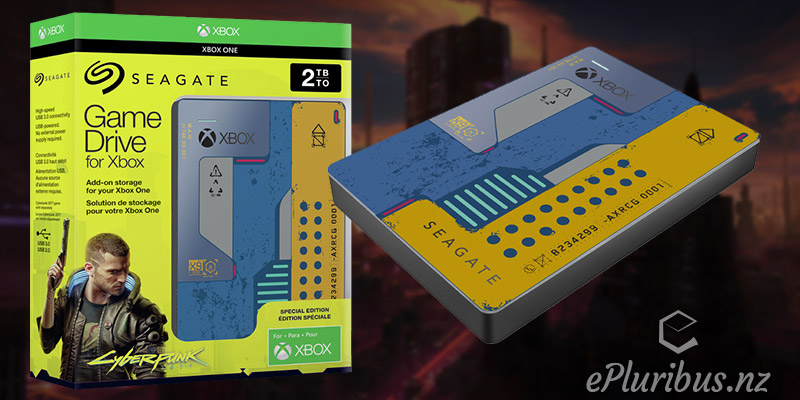 In collaboration with Microsoft and CD PROJEKT RED, Seagate has announced the latest addition to its popular line of storage for gamers – Game Drive for Xbox Cyberpunk 2077 Special Edition.

The only officially licensed Cyberpunk 2077 hard drive for Xbox One is available for presale today. With the 2 TB Game Drive, users can extend the storage capacity of their Xbox One console by balancing their gaming workload between console and external HDD. Fashioned with an enclosure inspired by the Cyberpunk aesthetic, the collectible, special edition Game Drive has a sleek, light, and portable design giving gamers the option to play in style and on-the-go.

Set up is a snap, as the game drive is instantly recognised by the Xbox One console and easily installed through Xbox OS. It is compatible with the full family of Xbox One devices, does not need a separate power cord and can store more than 50 downloaded games plus downloadable add-ons and achievements*1 for continued gameplay on Xbox One, Xbox One S, or Xbox One X consoles*2.

As with all of Seagate’s Special Edition Game Drives, this collectible will be available in limited quantities so don’t miss your opportunity!

About Seagate
Seagate crafts the datasphere, helping to maximise humanity’s potential by innovating world-class, precision-engineered data management solutions with a focus on sustainable partnerships. Learn more about Seagate by visiting www.seagate.com or following us on Twitter, Facebook, LinkedIn, YouTube, and subscribing to our blog.

©2020 Seagate Technology LLC. All rights reserved. Seagate, Seagate Technology, and the Spiral logo are registered trademarks of Seagate Technology LLC in the United States and/or other countries. All other trademarks or registered trademarks are the property of their respective owners. When referring to drive capacity, one gigabyte, or GB, equals one billion bytes and one terabyte, or TB equals one trillion bytes. Your computer’s operating system may use a different standard of measurement and report a lower capacity. In addition, some of the listed capacity is used for formatting and other functions, and thus will not be available for data storage. Actual data rates may vary depending on operating environment and other factors, such as chosen interface and disk capacity. Seagate reserves the right to change, without notice, product offerings or specifications.