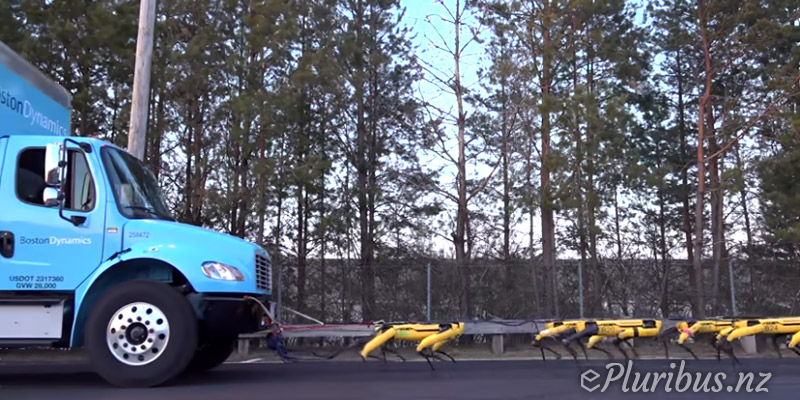 There’s no beating the Terminator. It’s the undisputed heavyweight champion of AI held up as proof of machines hell-bent on the destruction of humanity. Seeing Atlas do parkour and backflips, and four-legged Spot robots get pushed around by humans, Boston Dynamics is a close second.

These robots fascinate and terrify people. If facial recognition software and Amazon’s Alexa are held up as popular examples of surveillance capitalism, Boston Dynamics videos are usually shoved in ones face by people afraid of these robots’ mobility and physical prowess. This is partially due to the advanced robotics and unique design, and partially due to the success of a YouTube campaign over the course of the past six months in which each video sucks up millions of views.

It’s a signature of the brand at this point that Boston Dynamics makes videos that depict robots that appear capable of just about anything. There may have been more of these videos in recent months because Boston Dynamics is evolving from a research and development operation into a production company.

The SpotMini, its robot on four legs, is due out this summer, CEO Marc Raibert said onstage Thursday at a robotics and AI event held by Techcrunch. A pack of SpotMinis were seen pulling a truck in a video earlier this week, while the robot did a pretty good job of dancing to Bruno Mars music last year.

Kinema Systems, a company Boston Dynamics snapped up earlier this month, will also sell its deep learning-based vision system for industrial robots. Named a top AI startup at Nvidia’s GTC conference last year, Kinema Systems will power computer vision for some Boston Dynamics robots as well. The Handle robot on two wheels that made its box-stacking debut on YouTube earlier this month with Kinema Systems vision will go on sale in a year and a half or so, Raibert said.

Whereas Handle is designed specifically for stacking and moving boxes in warehouses, SpotMini was made to look capable of doing just about anything – walking up and down stairs, operating in rugged outdoor terrain, towing trucks, and so on – because it’s a general-purpose robot. Spot will be a customizable platform for users to add their own software, APIs, or hardware.

“We think of [SpotMini] as a general-purpose robot, which means we don’t have in mind specific applications that’s going to just knock things out of the park, but it’s got a lot of versatility, and is designed to have versatility, so people can customize them,” Raibert said onstage at the event. “We want it to be like the Android of the robots, where people are developing their own apps.”

Manipulators have also been added to the production-ready SpotMini to allow the robot’s body to stay still while the arm on its back grabs and controls objects. Cameras and other sensors can also be attached to the robot. More than a dozen construction companies are in various stages of testing and proof of concepts with SpotMini, Raibert said. Police departments like the Massachusetts State Police are also testing SpotMini. Demo video of SpotMini using its arm to open a door and enter a room invokes memories of a Black Mirror episode in which a four-legged robot was weaponized.

“[Police] worry about hostage situations or bomb scares, and the idea is to avoid having to have a person go through that door to see what’s going on,” Raibert said.

Externally, the ramp-up to production appears to have resulted in more videos. Internally, that’s meant a myriad of component testing and bug eliminating, as well as efforts to get in line with compliance and safety standards.

“Safety is a moving target because the simple thing you can do with safety is just turn something off, but if you have a robot on a stairway and something’s going wrong, you don’t necessarily just want to turn it off and have it tumble down, which could cause other problems, so we’re working with the standards people to try and come up with rules that makes sense in the context of robots like this,” Raibert said.

Like Hanson Robotics’ Sophia and SoftBank Robotics’ Pepper, Boston Dynamics has a public image, and people tend to either marvel at its robots or fear them. The SpotMini has sensors to keep it from running into people, but one of those things running into a person or hitting you as it falls down stairs sounds painful.

As the company inches closes to shipping SpotMinis that people could see in the workplace or other real-life situations, we’ll presumably see more testing and safety videos than parkour. But it’s doubtful this is the end of Boston Dynamics posting jaw-dropping videos that quickly draw attention – and in some cases provoke fear – from the media and YouTube fans.