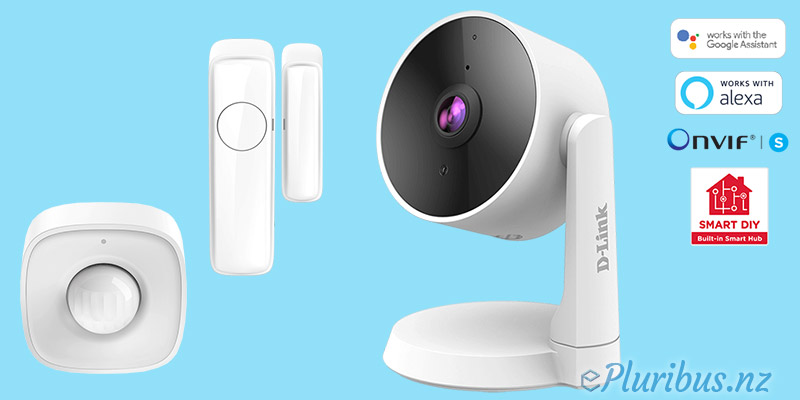 D-link has always been well known for their networking hardware, and their gradual expansion into networked smart devices has been steadily impressing me with the capabilities and quality. Each iteration of devices seems to be easier to set up and install, more intuitive to control, and far more compact than the one before, and this is highlighted in this 3-piece kit that covers the key bases – video, motion and access points. When you open the box you will be greeted with three more boxes – the largest of which contains the camera, and the two smaller boxes hold the motion sensor and window/door sensor.

The heart of the system is the Smart Hub, which is built into the camera. It’s so compact, at first I simply couldn’t believe that the hub was integrated into the sleek and compact camera’s base. Installing at setting up the camera is the first step – which makes sense really. Once the hub is active, the subsidiary devices and sensors can link to it and seamlessly integrate into your home security system. Setup was simplicity itself – plug it in, power it up, open the mydlink app and add the device through the menu. A quick scan of the QR code on the bottom of the camera, and I was away. Within minutes, I was able to use the app to see a live view of what the camera saw. You don’t need to be a tech wizard to do this stuff any more – it quietly and invisibly does all the hard work for you.

Next task, activating and syncing the sensors. A while ago, someone broke into my house via the patio door, despite two deadbolts. Turns out that they figured out a way to get at them from the outside and unlocked the door, avoiding alerting the neighbours by breaking the glass. Since then, I have kept the door permanently unopenable by building a brace that physically stops the door from opening more than a few inches – just enough to let the cat have free access to the outside, and no more. However, that gets really annoying at times when I want to load the woodbox in Winter or water the garden – I either have to go all the way around the house, or spend about 10 minutes disassembling the brace. I figured a sensor on the door would alert the security hub and allow me to use the built-in IFTTT functionality to trigger a series of actions that would alert me, turn on all the lights and start screaming blue hell from the fire alarms I have installed – all of which also have IFTTT functions. Seriously, it’s an amazing tool for connecting smart devices from different manufacturers. If you have an Alexa or Google Assistant unit, this will also work with them too, giving you voice-command access as well.

Setting up the sensors was just as simple, and took even less time. With both of them being wireless, naturally they have internal batteries so it’s worth noting what type they are and making sure you have a couple of spares on hand. The motion sensor uses a coin-type battery, but it’s not a common one – CR2450 – so you may not be able to pick them up from your supermarket. Places like Jaycar and hobby stores would be your best bet, or one of the big-chain stores like Noel Leeming or Harvey Norman are also likely to carry them. The door/window sensor uses a CR2 type battery, which is actually surprisingly easy to find – as well as the stores mentioned previously, this type of battery is also used in DSLR digital cameras, so your nearest camera store will likely have them in stock too, and are likely to be the more affordable option. Don’t forget to pull out the little plastic tabs on the back of each unit. Otherwise the units won’t power up.

After all three devices were powered up and linked to the home network, it’s time to mount them all. Yes, it is definitely better to activate them before mounting. The camera sits nicely on a table, desk or bookshelf but can also be mounted to a wall or even the ceiling. Screws and drywall plugs are provided, and the setup guide has clear instructions on how to mount it properly. While the camera mount allows the unit to be swivelled vertically, it has no lateral swivel, so be sure to mount it pointing in the right direction. The door/window sensor comes with a double-sided adhesive pad already on the back of both parts, and the motion sensor has a sticky pad already on the mounting plate as well as screw holes. No screws are provided though. Both units come with a spare set of adhesive pads in case you need to remove them for any reason.

After the units were settled in their new homes, and I had shuffled around some other devices to fill gaps in the coverage, I spent some time playing around in IFTTT making connections and control scripts to trigger the other linked devices based on various scenarios. Using simple logic, it was easy to set things up in a way that allowed me to create reactions based on the sequence of events. If the patio door was popped first, all hell would break loose, assuming that it is an intruder entering via that door. However, if the motion sensor in the hallway was triggered first, and it was late at night, then it was fairly safe to assume that it was me wandering and to basically ignore it. If the camera that looks outside triggers motion and then the front door opens, it will wait for 30 seconds to see if I perform a specific series of actions. If I do, all is good. If that sequence of signals doesn’t come, then it starts to scream all hell and pings my phone.

Some of the little things that really appealed to the geek in me included the ‘tamper detection switches’ on the sensors. As soon as the sensors are removed from their mounting plates, a tiny contact switch is released. This causes the units to send a notification to the hub, which can be used as another event-hook when it comes to setting reaction behaviours. This gave me the idea of setting the motion sensor inside the front door. As I enter the house, I can unhook the motion sensor briefly, and that specific action becomes one part of my routine that lets the system know it’s me and not an intruder. ANother ‘nice touch’ that impressed me was the design of the mounting plate for the motion sensor. The plate has it’s ends ‘turned up’ at 45 degrees and a second set of screw holes at the very ends. This means that it can be mounted in the corner of a room as well as on any flat surface. Brilliant thinking on the part of the engineers – I have not seen this feature on any other similar honme security device, and I now find myself wondering why not. I will also add that the sleek profile of the sensor helps ensure that even when mounted in a corner, it remains relatively unobtrusive and discrete.

Because of the comprehensive interoperability of the mydlink system, it’s very easy to reconfigure the security sensor net in stages without having to do any major overhauling. You can move sensors, add sensors, and as new devices come to market you can expand the functionality very easily. I happen to have a few other sensors from D-Link already in the building, as well as other cameras, so it was very easy to integrate them all into one extremely secure system. It gives real peace of mind to know that I literally can view every inch of my property at any time, no matter where in the country I am. I daresay that I could do it just as easily from another country, but… well… I don’t travel outside of NZ much at the best of times, and certainly not at the moment. #YayCOVID

Having my house set up with a “personal cloud” and network-attached storage (aka NAS) it was only a matter of a few minutes of tinkering to arrange for all video clips to be archived on my local drive as well as being stored on the microSD card that slots into the camera itself. This ensures that if the card fills up and starts to get overwritten by newer clips, I can still go back and check older footage from anywhere I happen to be at the time. As long as I have signal on my phone or access to an internet-connected PC, I will be able to keep tabs on everything that has happened, as well as what is currently happening. If you don’t have this kind of gear, you can opt to use D-Link own cloud storage facility for a relatively reasonable monthly fee. It’s also possible that your insurance company may be open to a reduction in your premiums to help offset this added cost – it’s worth asking. You never know… because my NAS is securely hidden, and thus very unlikely to be stolen should my house be successfully robbed, it will give me all the evidence required to satisfy the Police and more importantly, my insurance company. Because of that, I was able to arrange a very good deal for my coverage. The savings I make on the premiums is more than the cost of this kit, so it’s a no-brainer that this kit is a very affordable investment and may even prevent you needing to make a claim.

Overall, this is a great ‘starter kit’ if you don’t currently have a decent home security system, but it’s also an affordable way to expand your system if you already have something in place that links to Alexa, Google or IFTTT. I would love to see a larger kit on offer, perhaps with 3-4 windor/door sensors, a second motion sensor and perhaps a Smart Plug or two for integrating things like freestanding lamps into your security system. Throw in a secondary camera as well for good measure and that, in my mind, would be the ideal “My First Home Security System” kit and likely to be a popular option.

mydlink Smart DIY takes your Smart Home experience to the next level with devices using Zigbee technology. This Smart DIY Security Kit features a Smart Full HD Wi-Fi Camera with Built-in Smart Home Hub that can trigger amazing automations around your home with the Smart Motion Sensor and Smart Door/Window Sensor. Works with the Google Assistant, Amazon Alexa and IFTTT.