So… LED lighting is now all the rage, not just because it’s newer and nowhere near as power-hungry as traditional bulbs or even the twisty compact fluoro bulbs, but mainly because there are an ever-increasing variety of colour-shifting bulbs available. When it comes to funky colour-shifting lighting, there’s little out there that will beat the sheer WOW factor of the nanoleaf Aurora. A modular lighting system consisting of individual triangular panels with a set of LEDs in each corner, they join at the edges to make panels of up to 30 units per controller, in any arrangement you care to dream up, as long as it can be made out of equilateral triangles. There’s even a handy little “panel designer” in the companion app that allows you to experiment with placements to see how it will look before you start to mount them.

The starter pack (aka The Smarter Pack, very punny) reinforces the company ethic of minimal impact, because everything inside that you aren’t going to use, can be recycled. With the exception of the outer sleeve – which is glossy and in full colour – the packaging is all unbleached brown corrugated cardboard. Inside the box, you will find nine panels and bridge connectors, plus a pile of 3M Command Adhesive strips for mounting them, a controller pod plus the power adaptor suited to your country’s power systems. AT $340, this is not a cheap kit, but the amount of fun and amazement it can generate is pretty impressive. Nine panels not enough for you? Buy an expansion kit for $120! They come with three more panels and bridge bits… but if you really want to expand your possible designs, buy multiple starter kits! You will find it’s cheaper because a starter kit is $20 less than 3 expansion packs, and gives you an extra controller to boot in case you need a spare or want to split your design into multiple units later down the track.

Once you have your kit unpacked and assembled into the array of your choosing, using the companion app – available and pretty much identical on both iOS and Android platforms – to control it a little tricky, but quite simple after you have run through the full tutorial. I really can’t stress that point enough – you really should go through it. You can learn a lot by just diving in, but the frustration outweighs the satisfaction, so give them a go. Trust me on this. (Hear me on this, guys.) You can use the unit without creating a nanoleaf account, however it is worth it to access the huge library of colour schemes available in the “Discovery” tab. It takes a few moments to download a scheme and install it on your set of lights. Explore the wonders of other people’s imaginations, adjust the speed and brightness to suit your own needs, or get really serious and create some of your own! If you create something you are particularly proud of, you can upload it to the community pool so others can download and share your luminary vision.

If you want to add colour on the clock, explore the Schedules function to set different lighting schemes on hourly, daily or weekly rosters. I would have liked to have seen some more range and flexibility on this part – for example being able to set particular days rather than having it firing off every day, but there’s a neat way around that, with the inclusion of IFTTT support. If you aren’t aware of IFTTT, the name stands for IF This Then That and it’s a bridging system that allows different applications to talk to each other and send commands on trigger events. With a good alarm clock app with IFTTT support, you can set it to react thus: IF(Alarm) THEN(aurora(play.scheme)). Effectively, it means the lights can power up only on certain alarms. This is great for early morning starts in Winter when the sun has yet to make an appearance but you need to be up and about – filling your room with a sunrise and full daylight even while it’s still dark outside. I see the benefits of this for those who suffer from the Winter Blues.

There are a range of accessories available, such as screw-mounts for a more permanent fixture – especially useful if you plan to mounts these on ceilings – and flexible bridge bits to allow you to wrap the display around corners or explore 3d structures such as pyramids. There’s also the Rhythm module that allows you to sync your lights to music, making it oh-so-easy to turn any room into anything from a disco to a calming zen space. Perfect for when you want to set the right mood. With all this joy and admiration, it’s rough to switch to the downsides… but there are some.

First off has to be the method of connection. The little fibreglass and metal wafers used to join the panels are not exactly what you’d call sturdy, nor are they always the perfect fit. I had trouble connecting a couple of panels together and it turned out to be slight moulding errors in the panels – little stubs of plastic that hadn’t been trimmed off and were blocking the way. A couple of them were easy to fix – careful application of a sharp craft knife did the trick, but a couple of them required some more drastic work. At one point, I even had to file a slight bevel onto the bridge wafer so that it would slide over a small nubbin and fully lock in. So, be aware that it may not be easy-peasy-lemon-squeezy to assemble, but it can be done if you are careful. 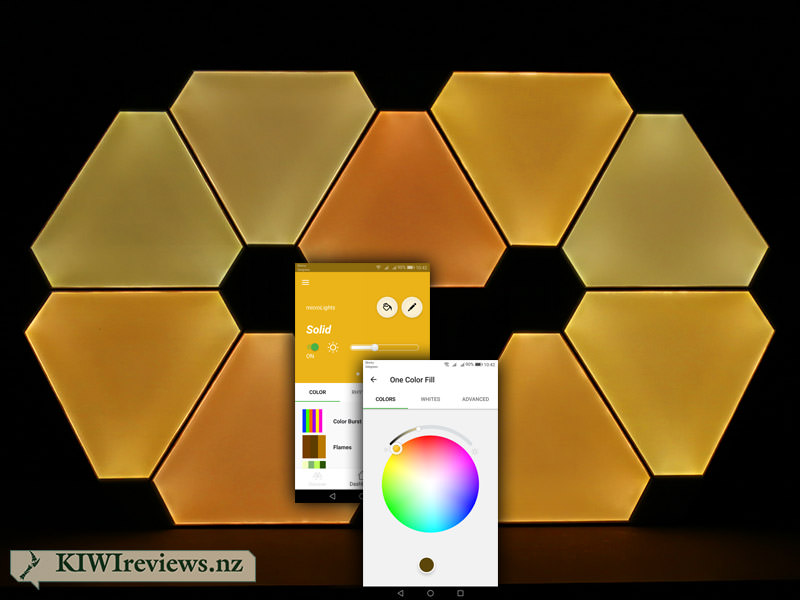 Another issue I found, as you can see from the photo above, was colour calibration. When the panels are at full-intensity, they shine equally well across the spectrum, however as I lowered the brightness I started to see variations in each panel. The dimmer I made them, the greater the differences became. I’m no expert, so I can’t explain exactly why, but I think it would be handy to include a ‘colour calibration’ tool in the app, to allow you to adjust each panel to match the others. This could possibly be automated too if the phone’s camera is accessed in realtime. I would also have liked to have seen an animated preview of lighting schemes before downloading them into the lights. I don’t know what memory space the controller has, but eventually, you will run out if you aren’t pedantic about deleting unwanted schemes. Having a little animated preview in the app shouldn’t be too hard, surely?

The one other thing I would have liked, and this is brought about by some of the promotional images I saw, is the ability to individually control each set of LEDs within each panel. One of the promo pics I was given showed a panel with each corner of a single panel set to a different colour. This, at least, shouldn’t be too hard to implement. Perhaps a future firmware and app upgrade will bring this feature in. On my wishlist is the ability to program panels individually too – I would dearly love the ability to set one panel to a specific colour, while the surrounding panels pulse and blend away, for example.

Overall, this has to be one of the neatest gadgets I have had the pleasure to test in the last few years, and I dearly hope to see more innovative additions to this platform in the very near future, including water-resistant panels I can use on the patio!
Rating:

Disclosure Statement: This unit was supplied free of charge expressly for the purposes of review by MacGear NZ. No fee was accepted or offered for this review. Review reposted with permission from KIWIreviews.nz