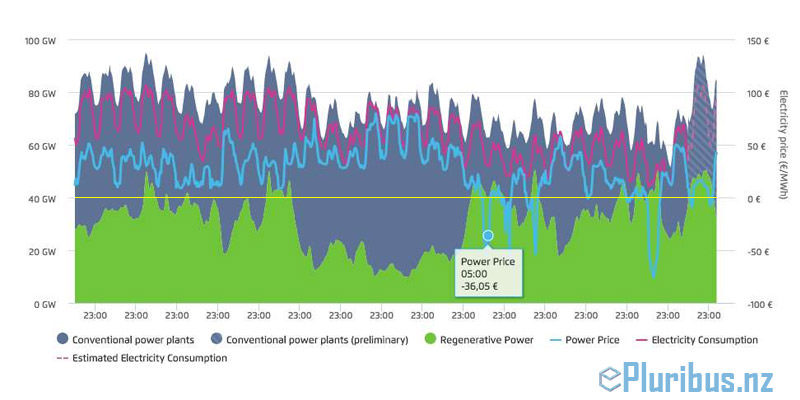 Electricity bills are often a worry, especially during winter when you have extra heating costs to think about, and a massive light-up Santa Claus to power sitting tastefully on your roof.

You’d expect energy prices to go up around the world during these winter months, but this isn’t the case everywhere. In Germany, electricity prices actually went into negative figures several times over the festive season.

Not for the first time in 2017, due to the unpredictability of renewable energy Germans were being paid to consume electricity, as prices dropped as low as €-76 ($-91).

So why is this happening? Well, the answer is that a $200 billion investment in renewable energy over the last 20 years is paying off for the country. Germany is now able to produce so much renewable energy that on days when it’s especially windy, the power produced outstrips demand from consumers. Whilst having excess power is obviously a good sign, it also creates a situation where prices are negative, and consumers are paid to take surplus electricity off the grid.

The grid, like in most countries, was designed when the majority of energy was produced using fossil fuels, and energy was created by power plants to match demand. Now that the energy is produced when it’s windy rather than when consumers need it, there is an excess of power on the grid and it’s putting the whole system under stress. As happened several times last year, during these periods where energy supply outstrips demand, larger consumers (such as factories) can be paid up to $100 per megawatt hour to use excess power and help prevent stress on the grid.

You’d think that energy companies, not generally known around the world for their generosity, would find some way to limit the production of energy, or store it for times when renewable output is low. However, the capability of storing the excess energy doesn’t yet exist. Batteries just don’t have enough capacity yet, even though they are getting much, much bigger.

Elon Musk recently began building a giant battery in Australia, which is expected to be capable of powering 30,000 homes. This battery will be charged using solar energy and any excess energy produced will be stored until there is demand for it. However, until batteries are capable of storing even more energy, there will still be an occasional situation where consumers are paid to use electricity.

Which, for now, is just one of the many perks of renewable energy.