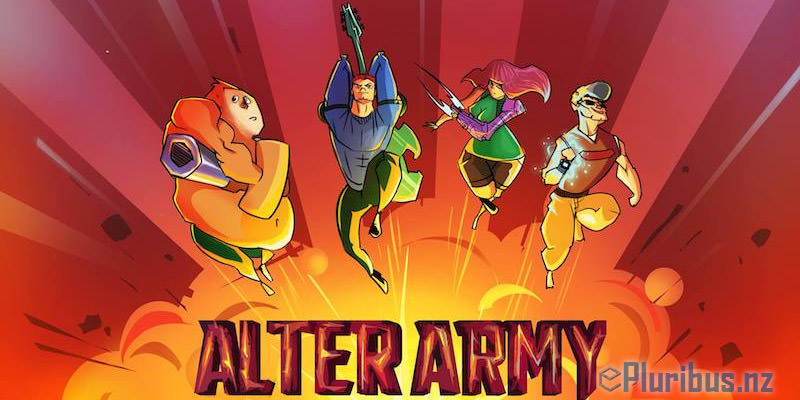 Indian game developers usually focus on Bollywood, cricket, or mythology as themes for their titles. And with good reason. Despite being home to a billion people, preferences are rather homogenised, making these options safe bets. Which is why Alter Army is the exception to the rule.

It’s an upcoming fast-paced action-adventure that’s in 2D and in a style reminiscent to retro-games of yore. It’s in line with what you’d expect from the days of the Nintendo Entertainment System and just as tough. As you can tell, it flies in the face of conventional business sense. No surprise since it’s being developed by Vague Pixels, a duo of 15-year-old students from Jaipur, and not “traditional” game developers. Vague Pixels consists of Mridul Pancholi and Mridul Bansal who have teamed up to work on Alter Army for over a year. Gadgets 360 spoke to Bansal to know more.

“Before this, Mridul Pancholi was already a game developer. He used to make small games for fun and used to upload it on Game Jolt and Edge. I was a tech geek and interested in game development. I started to learn Unreal. But then I changed schools and I met Mridul. We used to talk about these things a lot. After one or two years he thought we should work on a project as practice. We thought of a one month target we have to complete this project. Obviously this expanded a lot,” Bansal says of Alter Army’s origins.

On playing Alter Army, we noticed a resemblance to the likes of a host of indie rogue likes that pepper Steam such as Dead Cells and Nuclear Throne. Bansal confirms this is no coincidence. “Firstly our inspiration was Broforce [a 2D run-and-gun video game] when we started the project but then the game turned around a lot as we added more systems and features. We redid a lot of things, so we took inspiration from other titles like Nuclear Throne as well. The game feel in Alter Army is inspired by Nuclear Throne and Risk of Rain. Some bits from Broforce and Dead Cells too,” he says.

Aside from playing the aforementioned games, they drew from the likes of popular game design YouTube channel Extra Credits and Game Developer Conference (GDC) Talks to hone their skills. With a significantly expanded scope came derision from all corners. The duo were met with skepticism from those at home and in school.

“As we’re too young our parents didn’t support us a lot at the beginning. They used to think that this was a sh*tty thing and it can’t be a career. We were asked to focus on school and our teachers would mock us, stating that we couldn’t do our homework so how would we make a game, and friends would tell us to focus on studies for the fear of us being left behind,” he claims. “A year passed, everyone saw the game’s potential and the attention it was getting and they stopped doing those things,” he says, referring to Vague Pixels showing the game off at the Nasscom Game Developer Conference, India’s only game developer event. It was met with critical acclaim and was nominated for Upcoming Game of the Year.

“Now teachers don’t say anything. Friends say that we’re doing a good a job and we’re doing something special. Parents saw the potential. My father went with us to NGDC, the first time we were there and he saw a lot of potential. He said that we don’t have to do this full time but give half time to school and half time to this,” he explains. Thanks to the adulation, Bansal admits that there was the temptation to drop out of school and focus solely on game development. Although common sense prevailed.

“Yes we had thought about it but we can’t do that. Our parents won’t let us do that. It was a pretty hard for us to manage all those things like school, homework, exams, and the game,” he states. “So in the beginning we used to sleep at three in the morning and wake up at six. We used to sleep in school. Teachers would mock us for it.”

The conversation shifts to Alter Army itself. Bansal tells us the game will ship with four characters to choose from, each with different abilities. While it’s been lauded for its aggression system which rewards offensive play he feels it’s not been “implemented perfectly” yet. Don’t expect it to be a cake walk either. It’s been designed to force action-oriented gameplay.

“The more you play aggressively, the more your energy bar will charge and the more you can play efficiently. You have to play aggressively as much as you can. The game’s difficulty will be hard forcing you to do so,” he says. What’s more, there’s a coherent story too. According to Bansal, it’s a massive Easter Egg related to his parter in crime’s past efforts. “There will be story parts in the game with humour and cinematics, if you focus on that, it will be connected to previous games that Mridul Pancholi made,” he reveals. “There will be several things to decode for it to make complete sense.”

For now, Alter Army is due to hit Steam Early Access around January 25, though Bansal cautions that the date isn’t set in stone, and should be priced around $5 to $7. And while our time with its demo shows off a title that’s made for using a controller, there is no console version in the works. Well, not yet at least.

“Initially it’s PC, but if it does well on Steam we’ll consider consoles,” Bansal says.