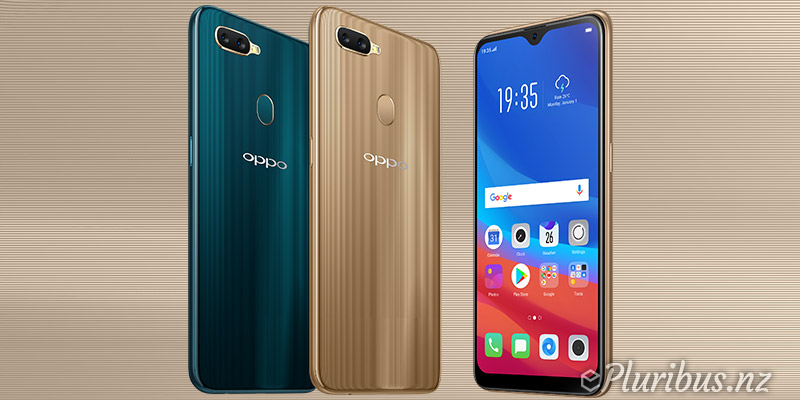 2019 started off with a snap thanks to OPPO, with the release of the AX7 smartphone. Aimed squarely at the mid-range market but with a price tag that sat it in the upper ranks of entry-level devices, this one was going to have appeal no matter what… but there’s a lot of good things to be said about this device that outweighs the few small niggles I got from my time with it. Aesthetically, this unit has that top-end look that is going to give every status-symbol hunter a little tingle in their happy place – the stylish case with the textured and semi-prismatic back panel in gold or blue is going to turn a few heads as you strut down the main road with this against your ear. The light weight and comfortably rounded design also have it feeling so ‘right’ in your hand you’ll never want to put it in a case or your pocket. Speaking of cases, it does come, in the box, with a rubberised half-shell that was an immediate turn-off for me. I could not bring myself to put it on this beautiful handpiece so back in the box it went. If this wasn’t a loaner, it would have gone into the bin.

While I personally have a preference for wider screens, this sleek and stylish design, with the now-trending ‘waterdrop’ notch at the top instead of a bar that takes over the full width, gave me such a beautiful view, and paired with the camera’s amazing clarity I was almost in love at first snap. OPPO is unashamedly targetting the Selfie Generation, because unlike some smartphones that put the best camera on the back, this unit has the same 16MP offering on the front as well, ensuring that you get the same amazing quality whether you’re shooting the scenery or your face for your next Instagram masterpiece. The big difference is that the rear camera has a depth-sensor paired with it, giving you some extra features not available when you are shooting the selfies. Functionally and aesthetically, OPPO has spent a lot of time on the placement and engineering of the cameras, making sure they are optimally placed for best results and minimal chance of sticking your finger in the way – something other smartphones I have reviewed have failed on to some degree.

Relating to the camera functions, the software is pretty well stocked, and the AR avatars/stickers are pretty fun to play with. It’s not really my thing, to be honest, so I didn’t really dig into it much, but I did see enough to know that for those who love to mess around with the more fun side of things, there is going to be something for everyone. One of the niggles for me though was the shortage of camera modes. While the night-shot capabilities are second to none, I was disappointed to see nothing in the way of long-exposure modes for night shots. I have a lot of fun doing star-trail shots on my regular handset, and it was a complete shock to see this aspect of photography almost utterly ignored. Still, what it does so, it does VERY well, and I could forego a few features in exchange for the drastic improvements in photography this handset offers.

Storage isn’t at the peak for its peers though, with 4GB of RAM and 64GB of internal storage – the reason I say this is that other phones out there come with 128GB. However, you can slap in a microSD card to boost storage AND you have TWO SIM slots as well, meaning you can have your work number and your private number without having a second piece of kit to carry around. This is the first phone I have had direct experience with that gives you the best of all worlds in that regard – most of the others I have had give you the choice – second SIM OR microSD card, but not both. For this one thing alone I would get this handset! I was able to confirm the specs that say it will happily read a 256GB microSD, but I have seen reports that it will handle a 512GB just fine, though I can’t confirm them first hand.

With one of the largest battery ratings I have seen in a handset under $1,000, this unit is packed with 4230mAH which means some very good staying power for everyday use, and respectable duration for heavy usage scenarios. The Qualcomm Snapdragon 450 CPU does give it a reason to have such a honking great battery though, as it will chew through the juice if you load it up and push it a bit since it isn’t exactly the fastest engine on the racetrack and heavy loading will tax it. Playing movies and games will reduce your battery life somewhat, but for day to day usage I only had to pop it on charge once every 3-4 days. Using it as my one-for-all device – phone, camera, scheduler, TV, web browser, etc – I didn’t quite make it through 48 hours before I had to pop it back on the plug. Still, that’s really quite good, even taking into account that I’m not exactly a heavy device user anyway. Playing something like the infamous PUBG game for a day solid would really hammer the CPU and battery until it cried for mercy.

Now, I’m quite comfortable with the AndroidOS, and there are a lot of features that are universal despite the OEM overlays, however, I could not really get comfortable with the ColorOS system. Some features I liked were missing – eg. certain camera modes, and some of the UI configuration settings – while others were there but in a different place that had me fumbling too often to enjoy the experience. It may be a little thing, but something they are the ones that make or break a user experience – the three buttons at the bottom of the screen – back / home / task manager – were back to front from what I am used to, so every time I wanted to go ‘back’ I ended up bringing up the list of currently running apps, and vice versa. Despite over an hour of hunting, I couldn’t find any place that would let me reverse the order. As I say, a little thing, but one that took some of the shine off my time with this handset.

Overall, I still think this phone is going to shake up the marketplace – you simply don’t get this kind of gear from any other brand at a price even close to this. Would I recommend it to a friend? Sure, in fact, I showed it to a friend recently and the next day they went and bought three of them – one for him, his wife and their son before he heads off to uni. He pointed out that the other handset he was looking at would have meant he could only have gotten two for the same money, and even then it would have cost an extra $75 or so. This device will be one of those love-it-or-hate-it devices for most people, and while I personally find a few key things annoying, I still love it. I just can not bring myself to hate something so beautiful, at such a good price.

Disclosure Statement: This unit was supplied on loan by OPPO NZ expressly for the purposes of review. No fee was offered or accepted for this impartial review.