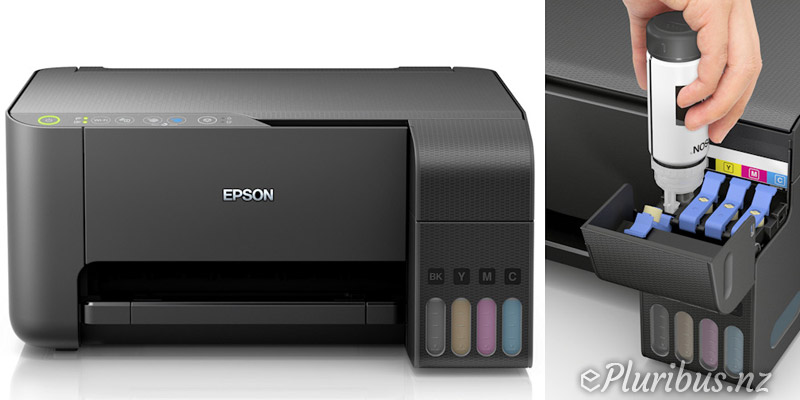 As with all printers, the first step – after wrestling it out of the box – is getting it set up. For that, EPSON provide a nice and simple to understand guide that’s heavy on picture sand light on words – this makes it easy for anyone of any level of technical skill to get the machine up and running. However, with this unit, it is made very clear from the start that setup is NOT a quick process. This may frustrate some people, and cause them to jump the gun, rushing through the steps a bit and causing trouble. Be patient – that’s the one bit of key advice I can give you, and if you listen to only one thing, let that be the one thing.

After unpacking the unit, you are instructed to load the ink tanks first, before you even plug it in. This is quite simply the easier refill I have ever done on an ink tank. The bottles are individually and uniquely keyed so they will not lock into the wrong ports – you can’t mix up the colours, unless you take to the bottles with tools to deliberately damage the keyways. You don’t need to shake the bottle, squeeze them, bang them or tap them – just slot them in, push them down to unlock the filling port, and leave them alone for less than a minute – the tanks will fill up very quickly, and you can actually fill two at once, saving even more time.

After filling the tanks, it’s time to power up and tell the printer to perform an initial ink test – this takes an astoundingly frustrating 10 minutes, while it plows through – what I estimated to be – about 3-4 weeks worth of ink, based on a full bottle being 2 years worth of ink and what was left in the bottles after the initial fill, which you are later instructed to use to replenish the ink lost during the setup. Further setup stages that take a while include installing drivers and software, doing a firmware update (which failed twice before we got it to work by digging up an old USB-A cable and doing a hardline connection between the printer and the PC. How old-school!) All in all it took over an hour before we were ready to print our first actual document, but the results were very impressive I will admit.

One of the test documents was a 140 page software manual. To save on paper, we attempted to do a duplex (double-sided) print, which proved to be both frustrating and uncomfortable. Frustration was caused by the long delays while it printed the even-numbered pages – extremely slowly I might add – then told me to put the sheets back in the hopper so it could print the odd-numbered pages on the backs. OK, I get it… entry level unit, no internal duplexing unit, has to be done manually… but it took more than three times as long to do as it took to print the whole lot out single-sided! The uncomfortable bit was that in between each page it printed on the first run, it paused long enough to have printed the other side and during the pauses it emitted a very high pitched squeal that was very hard to listen to – in the end, I had to move to the other side of the building and shut two intervening doors before I couldn’t hear it any more.

Still, the results were exceptionally clean and crisp, with all of the images faithfully reproduced in full, rich colour and some beautifully blended lighter tones too – something older printers have had trouble with, often creating banding or bad colour matching instead. Printing off a few glossy photos on EPSON-branded photo paper gave such stunning results I would have sworn it was an optically printed photo, not something out of a desktop unit. I’ve owned, and tested, some high-end in their day printers that touted their photo printing capabilities, but this one was one of the best I have seen in a while, and certainly the best in it’s price bracket I personally have come across in the last 5 years. If this is the entry level device, I’d love to see what the higher-rated models are capable of!

My biggest disappointment though was the complete lack of an ethernet port. I have a lot of WiFi devices on the 2.4GHz band, so there’s sometimes annoying cross-talk between them that causes signal loss even with intelligent WiFi hardware. From a security perspective, I do prefer to keep any devices that use consumables to be hardlined only to reduce the chances of 3rd party hijacking. The fact that this device would only operate via USB connection and WiFi wouldn’t be the deal-breaker for most that it is for me, mainly because most modems and routers now have USB ports that would allow you to install your printer on the network via sharing through those devices… my issue is that every network-available USB port in my building has a hard-drive on it, giving me a huge local cloud storage solution that is highly modular and entirely portable. It does not lend itself to adding a printer into the mix. This is a personal bug-bear and not necessarily something that will affect the majority, but it is worthy of note for those who want a hardwired network printer and don’t have access to a network-attached USB port that is always active.

The lack of a paper tray may also annoy some, especially as the cooler months roll around, but it is actually a good thing that this unit only has a rear-feed option. Firstly, it keeps the paper flatter, so it doesn’t have to get bent around inside the printer, so you can print heavier gauge stock – up to 300gsm which is heavier than standard business card stock – and it also means you don’t load up a whole ream, forget about it, and then wonder why your print quality starts to deteriorate over time during the cooler weather when moisture in the air becomes more of an issue. Just remember to store your unused paper in an airtight container – clip-lock style containers are cheap and do the job very well – and only load up paper when you need to print something.

Printing from mobile proved to be a bit of an issue, but I suspect that’s more to do with the network security settings than any real fault of this unit. I had no trouble printing from an android phone, but my iPhone 6 could not seem to hold a solid data connection to the device and caused the print to be corrupted beyond salvage. printing wirelessly from a laptop proved to be no issue at all, and was successful from 3 rooms away over WiFi Direct. For security reasons, ePrinting services were not installed because the office security policies do not allow remote connections except via secure VPN and/or SSL Tunneling.

Overall, is this a good printer for someone wanting something simple, durable and long-lasting? On most counts, I would say a definite yes. You really are not going to find the initial setup to be pleasant, fun or fast, but at least you only need to do it once. Once your printer is up and running, printing to it is relatively easy, the output is extremely fast for a low-end printer, and the scanning is as good as any other model out there – there’s nothing particularly new, cutting edge or WOW about this unit’s scanning so I won’t go on about it. It works, simple as that.

Disclosure Statement: This unit was supplied free of charge by Epson NZ expressly for the purposes of review. No fee was offered or accepted for this impartial review.