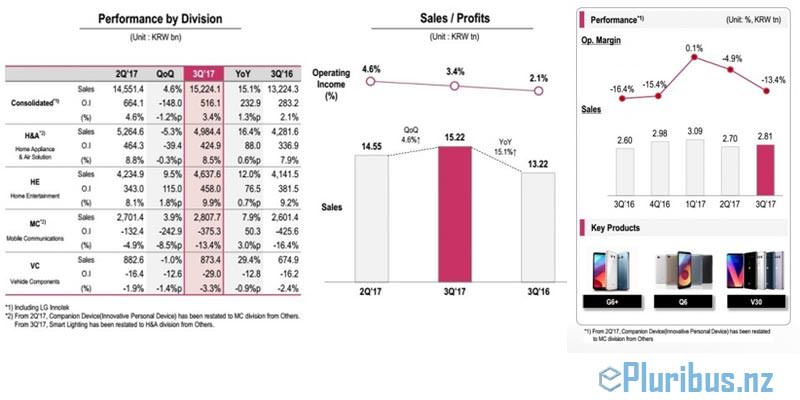 LG Electronics posted its Q3 2017 financial results and the trends from Q1 and Q2 2017 earning releases continue. The company keeps going strong, mainly thanks to the Home Appliance & Air Solution divisions, but the mobile communications branch is still unable to turn a profit. The company posted revenue of KRW15.22 trillion (USD$13.44 billion), which is a 15% increase from Q3 2016. The operating income almost doubled to KRW516.1 billion (USD$455.7 million).

Mobile Communications posted revenue of KRW2.81 trillion (USD$2.48 billion). This results in an 8% increase over Q3 2016 and 4% higher than the April-June period of this year. The money comes mostly from the sales of the G6 flagship, along with some mid-tier devices like the LG Q6 and the LG K-series.

For a second consecutive quarter, the mobile business posted an operating loss, this time KRW375.3 billion (USD$331.37 million). It is the worst operating result of all four LG divisions, but at least it’s not as bad as Q3 2016 when the loss was 13% worse or around KRW425 billion (USD$377 million). In the following quarter, LG says it will focus on the LG V30 and will increase sales of both the cameraphone and the mid-tier LG Q6. The company also optimized manufacturing profits and thus expects better results in Q4 2017.

The leader is once again the Home Appliance & Air Solution division. It accounted for one-third of the revenue – KRW4.98 trillion (USD$4.4 billion), which is a 16% increase YoY. Operating income also grew massively – 26% YoY.